Connecticut-born Benedict Arnold fought for the American Continental Army during the Revolutionary War. Among the distinguished war successes in which he was involved were the capture of Fort Ticonderoga, organizing the militia response in the Battle of Ridgefield, Connecticut, and key actions during the two Battles of Saratoga. Despite his accomplishments, he was passed over for promotion and suffered other officers claiming credit for his deeds.

He became embittered. Arnold opened secret negotiations with the British to change his allegiance. He had gained command of the fort at West Point, and planned to surrender it to the British Army. On this day in 1780, Arnold learned that the Americans had captured British Major John Andre the previous day. Andre was carrying papers that revealed the West Point plot.

Arnold fled down the Hudson River to the British ship Vulture, narrowly avoiding capture. He was commissioned as a Brigadier General in the British Army, and led British forces in Virginia and Connecticut, before the war ended. After the war, he moved to London, where he lived out his life. Andre, on the other hand was hanged for his part in the West Point plot.

The name Benedict Arnold became a synonym for “traitor” in the 19th century and has remained so to this day. His early contributions to the American independence effort are generally unknown in popular culture.

Map of the Area Claimed

According to the heirs of William Penn—John and Thomas Penn—a deed existed from the 1680s in which the Lenape tribe promised to sell to Pennsylvania a tract of land that began at the junction of the Delaware and Lehigh Rivers (present day Easton, Pennsylvania) and extending as far west as a man could walk in a day and a half. The Lenape, aka The Delaware, assumed that distance would be about 40 miles.

On this date in 1737, Edward Marshall (one of three men who had been hired to “walk”—in reality, they were the three fastest runners in the colony) completed a 70-mile trip from Easton to what is today near Jim Thorpe, Pennsylvania. He was the only one of the three to finish.

In what can only be described as a land swindle, surveyors from the Commonwealth drew a perpendicular line from the finish point toward the northeast, ending at the Delaware River. They claimed all of the land east of the two lines, which resulted in the Lenape losing some 1,200 acres, an area the size of Rhode Island.

In 2004, the Delaware Nation sued Pennsylvania for 314 acres of the original “purchase,” but the U.S. District Court granted the Commonwealth of Pennsylvania’s motion to dismiss. The Supreme Court refused to hear the case.

You can read more details about this event at the Monroe County Historical Association web site. 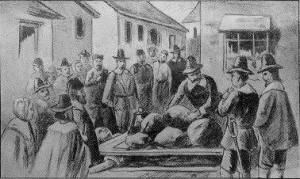