Henry Perky was a hell of a good railroad car salesman, but it was a tough business, and it took its toll on his digestive system. After his company’s factory burned down, his doctor recommended a diet of raw vegetables and boiled whole wheat grain with cream three times a day for his ulcers and chronic dyspepsia. Perky did his best to follow his… doctor’s advice; not surprisingly, however, Perky found the boiled wheat grain less than appealing.

Sometime in the early 1890s, at a Nebraska hotel, Perky encountered a man similarly afflicted who was also eating boiled wheat with cream. An 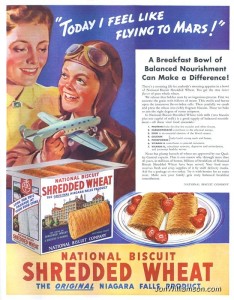 idea started cooking in Perky’s mind, and in 1892, he came up with an idea for a better way to boil wheat. Working with a machinist friend, William H. Ford, he developed a machine for making “little whole wheat mattresses”.

“Seventy five percent of all human ills are traced to self-poisoning through constipation. In order to prevent this condition food should contain some indigestible fiber, known as ‘roughage.’ Thousands are prodding their liver with pills when all they need is roughage in their foods. Bran, which is the outer coating of the wheat berry, is the best roughage for stimulating bowel movement. All the bran of the whole wheat is in Shredded Wheat. “

He established a small bakery in Denver to make the “biscuits,” which he sold door-to-door via a fleet of horse-drawn wagons. The wheat biscuits were a hit. In 1895, having established a demand for his wheat biscuits, Perky decided to move his operation to Boston, and then on to Worcester.

In 1901 he decided to build a new plant at Niagara Falls. The factory was “The Palace of Light” – white-tiled, air-conditioned, well-lit with floor to ceiling windows. Equipped with showers, lunchrooms (free lunch for women – men had to pay 10¢), and auditoriums, it even had a roof garden with a view of the Falls.

Over a hundred years later Shredded Wheat is still made at Niagara Falls and is sold throughout the world, and Post Cereals still proclaims its unsurpassed health benefits: