When Louis Armstong was seven years old he went to work helping the Karnofsky family collect junk in the red light district of New Orleans: 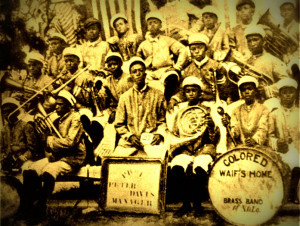 “When I would be on the Junk wagon with Alex Karnofsky, I had a little Tin Horn—the kind the people celebrates with.— I would blow this long tin horn without the Top on it, Just—hold my fingers close together. Blow it, as a Call for old Rags—Bones—Bottles or Anything that the people and kids had to sell. The kids would bring bottles and receive pennies from Alex. The Kids loved the sounds of my tin horn…

I had a lot of Lucky Moments with the Karnofskys. After blowing the tin horn—so long—I wondered how would I do blowing a real horn,—a cornet was what I had in mind. Sure enough, I saw a little cornet in a pawn shop window—Five dollars—my luck was just right. With the Karnofskys loaning me on my Salary—I saved 50 cents a week and bought the horn. All dirty—but was soon pretty to me.

After blowing into it a while I realized that I could play “Home Sweet Home”—then here come the Blues. From then on, I was a mess and Tootin away. I kept that horn for a long time. I played it all through the days of the Honky Tonk. People thought that my first horn was given to me at the Colored Waifs’ Home for Boys.  But it wasn’t…

The Karnofsky family came to America from somewhere in Russia a long time before I was born. They came to New Orleans as poor as Job’s Turkey. They settled in a neighborhood of Niggers which was nothing but a gang of Old Run down houses with the Privies (toilets) out in the back yard. …They put their Shoulders together and did a fine job fixing up that house. They had a pretty good size yard. So they started a little business in no time at all. That’s where I came in.…

Alex would get good money for his Junk when he had saved up enough to sell. And pile up the yard again, going to the Bank every week. Both Brother did the same thing with their profits. Being a helper for those boys made me very proud and happy. I began to feel, like I had a future and “It’s A Wonderful World” after all. …

The Karnofsky Family kept reminding me that I had Talent—perfect Tonation when I would Sing. One day when I was on the wagon with Morris Karnofsky—we were on Rampart and Perdido Streets and we passed a Pawn Shop which had in it’s Window—an old tarnished beat up’ “B” Flat Cornet. It only cost Five Dollars. Morris advanced me Two Dollars on my Salary. Then I put aside Fifty Cents each week from my small pay—finally the Cornet was Paid for in full. Boy was I a happy Kid.

The little Cornet was real dirty and had turned real black. Morris cleaned my little cornet with some Brass Polish and poured some Insurance Oil all through it, which Sterilized the inside. He requested me to play a Tune on it. Although I could not play a good tune Morris applauded me “just the same, which made me feel very good.

As a Young Boy coming up, the people whom I worked for were very much concerned about my future in music. They could see that I had music in my Soul. They really wanted me to be Something in life. And music was it.

Robert de La Salle arrived in New France intent on finding a passage to the Orient. He settled on the Island of Montreal, and his grant soon became known as Lachine (French for China). When the native Mohawks told him of a great river, the Ohio, which flowed into another great river, the Mississippi, La Salle organized a grand expedition to explore the west and set off up the St. Lawrence and across Lake Ontario.

Arriving at the head of the lake, he found that there was no way he could navigate around Niagara Falls to the upper Niagara River. Unable to transport a ship above the falls, he portaged around it and set camp on Cayuga creek where his men set to work hand-hewing timbers and laid the keel for a new ship for the upper lakes, a schooner.

On August 3, the first ship built in America slid into the creek. “The vessel was sixty tons burthen, completely rigged, and found with all necessaries, arms, provisions and merchandise; besides seven pieces of cannon, two of which were of brass. There was a griffin flying at the jib-boom and an eagle above, and the other ornaments that were used to grace a ship of war.”

The vessel was christened “Le Griffon”. She carried seven small cannon, a flag with an eagle at her mast, and a carved griffin on her prow. On August 7, aided by a northeast wind and a dozen men tugging at a tow line from the shore, Le Griffon passed up into Lake Erie.

As she entered the lake a dozen Iroquois gaped from the banks, amazed at the vision of a ship with wings. Her sails spread to the wind, a salute was fired from the cannon and all on board joined in the “Te Deum Laudamus.” Then her prow turned toward the great Northwest.

The vast inland seas to which she headed had never been explored except by canoe. A moonless night and a thick fog settled about the boat; Lake Erie was full of shoals – suddenly the sound of breakers was heard.  LaSalle ordered the pilot to steer east northeast. The next day they passed Long Point; at sunset they had sailed forty-five leagues.

On the 9th of August they reached the mouth of the Detroit River. Le Griffon entered the river and sailed between Grosse Isle and Bois Blanc Island where all kinds of game abounded.  On the 10th of August, the festival of Saint Claire, they crossed the lake which they named for the saint, and entered Lake Huron on August 23. A fresh wind drove them along its shore, and then Le Griffon tacked to the northwest, and crossed Saginaw Bay.

On the 25th of August the wind veered to the southwest. A furious gale started to blow and LaSalle’s crew was forced to haul down their topmasts, lash the yards to the deck, and drift at the mercy of the storm.

Finally, on the 27th they rounded Point St. Ignace and entered the calm waters of the bay of Michilimackinac where they encountered a settlement of Hurons, Ottawas and a few Frenchmen. The arrival of the Griffon was the occasion for great rejoicing – more than a hundred bark canoes gathered around her, a salute was fired from the deck, and  mass was celebrated.

By then fall was in the air – it was time to return home. Le Griffon sailed to an island peopled by the Pottawatomies at the entrance of Green Bay. While LaSalle made plans to continue his explorations by canoe as far as he could on the lakes, and from there to the country of the Illinois, he loaded Le Griffon with furs, to send them back to the store house he had built above the Falls.

Le Griffon sailed for the Niagara September 18 under the command of the pilot, Luc, assisted by a supercargo and five good sailors, with directions to call at Michilimackinac, and then to proceed to the Niagara. She bore a cargo valued at sixty thousand francs.

A favorable wind bore her from the harbor, and with a single gun she bade adieu to her builder. Le Griffon was never seen again.