Tell General Howard I know his heart. What he told me before, I have it in my heart. I am tired of fighting. Our Chiefs 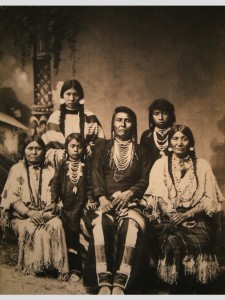 are killed; Looking Glass is dead, Ta Hool Hool Shute is dead. The old men are all dead. It is the young men who say yes or no. He who led on the young men is dead. It is cold, and we have no blankets; the little children are freezing to death. My people, some of them, have run away to the hills, and have no blankets, no food. No one knows where they are – perhaps freezing to death. I want to have time to look for my children, and see how many of them I can find. Maybe I shall find them among the dead.

Hear me, my Chiefs! I am tired; my heart is sick and sad. From where the sun now stands I will fight no more forever.

“My telephone on the desk in the Usher’s Room at the White House rang and Mrs. Wilson’s voice said, ‘Please get 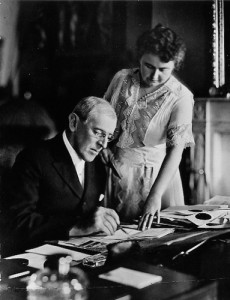 Doctor Grayson, the President is very sick.’ … I immediately called Doctor Grayson at his home, repeated the message as Mrs. Wilson had given it to me, and ordered one of the White House automobiles to go for him with all haste. I then went upstairs to see if there was anything I could do…

I waited up there until Doctor Grayson came, which was but a few minutes at most. A little after nine, I should say, Doctor Grayson attempted to walk right in, but the door was locked. He knocked quietly and, upon the door being opened, he entered… In about ten minutes Doctor Grayson came out and with raised arms said, ‘My God, the President is paralyzed! Send for Doctor Stitt and the nurse’…

The second doctor and nurse arrived and were shown to the room. The employees about the place began to get wise to the fact that the President was very ill, but they could find out nothing more. Other doctors were sent for during the day, and the best that could be learned was that the President was resting quietly. Doctor Davis of Philadelphia and Doctor Ruffin, Mrs. Wilson’s personal physician, were among those summoned. There were doctors everywhere…

The President lay stretched out on the large Lincoln bed. He looked as if he were dead. There was not a sign of life. His face had a long cut about the temple from which the signs of blood were still evident. His nose also bore a long cut lengthwise…

I was told that he had gone to the bathroom upon arising in the morning and was sitting on the stool when the affliction overcame him; that he tumbled to the floor, striking his head on the sharp plumbing of the bathtub in his fall; that Mrs. Wilson, hearing groans from the bathroom, went in and found him in an unconscious condition. She dragged him to the bed in the room adjoining and came out into the hall to call over the telephone for the doctor.

For the next three or four days the White House was like a hospital. There were all kinds of medical apparatus and more doctors and more nurses. Day and night this went on. All the while the only answer one could get from an inquiry as to his condition was that it ‘showed signs of improvement.’ No details, no explanations. This situation seemed to go on indefinitely…”

First Lady Edith Wilson immediately took charge, grasping that she needed to not only care for the incapacitated president but also to keep the American government running as smoothly as possible.
She took over many of the president’s responsibilities, including reviewing important matters of state. All communication with the President went through her – she entered the sick room with messages and emerged with verbal instructions or the scrawl of a signature on a piece of paper. Sometimes she even signed Wilson’s name to documents without consulting the convalescing president.

The president recovered slowly – he remained partially paralyzed on one side– and spent the remainder of the year in a wheelchair.  His mind often wandered and he couldn’t remember as well as before. Edith, suspicious of the political motives of Vice President Thomas Marshall, kept the true extent of Wilson’s incapacitation from the press and his opponents. The outside world knew none of this.

While Edith Wilson called this period her “stewardship” others called her “the first woman President.”

If I were so time-poor as to have only one day to spend in Yosemite I should start at daybreak, say at three o’clock in midsummer, with a pocketful of any sort of dry breakfast stuff, for Glacier Point, Sentinel Dome, the head of Illilouette Fall, Nevada Fall, the top of Liberty Cap, Vernal Fall and the wild boulder-choked River Cañon. 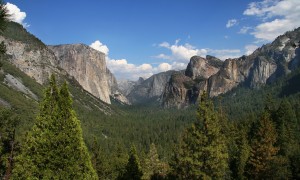 The trail leaves the Valley at the base of the Sentinel Rock, and as you slowly saunter from point to point along its many accommodating zigzags nearly all the Valley rocks and falls are seen in striking, ever-changing combinations. At an elevation of about five hundred feet a particularly fine, wide-sweeping view down the Valley is obtained, past the sheer face of the Sentinel and between the Cathedral Rocks and El Capitan. At a height of about 1500 feet the great Half Dome comes full in sight, overshadowing every other feature of the Valley to the eastward. From Glacier Point you look down 3000 feet over the edge of its sheer face to the meadows and groves and innumerable yellow pine spires, with the meandering river sparkling and spangling through the midst of them. Across the Valley a great telling view is presented of the Royal Arches, North Dome, Indian Cañon, Three Brothers and El Capitan, with the dome-paved basin of Yosemite Creek and Mount Hoffman in the background. To the eastward, the Half Dome close beside you looking higher and more wonderful than ever; southeastward the Starr King, girdled with silver firs, and the spacious garden-like basin of the Illilouette and its deeply sculptured fountain-peaks, called “The Merced Group”; and beyond all, marshaled along the eastern horizon, the icy summits on the axis of the Range and broad swaths of forests growing on ancient moraines, while the Nevada, Vernal and Yosemite Falls are not only full in sight but are distinctly heard as if one were standing beside them in their spray.

The views from the summit of Sentinel Dome are still more extensive and telling. Eastward the crowds of peaks at the head of the Merced, Tuolumne and San Joaquin Rivers are presented in bewildering array; westward, the vast forests, yellow foothills and the broad San Joaquin plains and the Coast Ranges, hazy and dim in the distance.

From Glacier Point go down the trail into the lower end of the Illilouette basin, cross Illilouette Creek and follow it to the Fall where from an outjutting rock at its head you will get a fine view of its rejoicing waters and wild cañon and the Half Dome. Thence returning to the trail, follow it to the head of the Nevada Fall. Linger here an hour or two, for not only have you glorious views of the wonderful fall, but of its wild, leaping, exulting rapids and, greater than all, the stupendous scenery into the heart of which the white passionate river goes wildly thundering, surpassing everything of its kind in the world. After an unmeasured hour or so of this glory, all your body aglow, nerve currents flashing through you never before felt, go to the top of the Liberty Cap, only a glad saunter now that your legs as well as head and heart are awake and rejoicing with everything. The Liberty Cap, a companion of the Half Dome, is sheer and inaccessible on three of its sides but on the east a gentle, ice-burnished, juniper-dotted slope extends to the summit where other wonderful views are displayed where all are wonderful: the south side and shoulders of Half Dome and Clouds’ Rest, the beautiful Little Yosemite Valley and its many domes, the Starr King cluster of domes, Sentinel Dome, Glacier Point, and, perhaps the most tremendously impressive of all, the views of the hopper-shaped cañon of the river from the head of the Nevada Fall to the head of the Valley.

Returning to the trail you descend between the Nevada Fall and the Liberty Cap with fine side views of both the fall and the rock, pass on through clouds of spray and along the rapids to the lead of the Vernal Fall, about a mile below the Nevada. Linger here if night is still distant, for views of this favorite fall and the stupendous rock scenery about it. Then descend a stairway by its side, follow a dim trail through its spray, and a plain one along the border of the boulder-dashed rapids and so back to the wide, tranquil Valley.