When Henry Longfellow was thirty-five, he contemplated his own death which wouldn’t arrive for another forty years, and wrote this sonnet, which he considered too personal to publish during his lifetime.  The title comes from the first line of Dante’s Inferno: 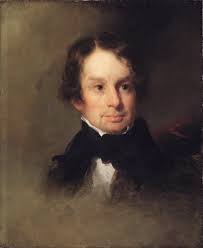 (In the middle of the journey of our life,
I found myself in a dark wood
with the right road lost.)

Half of my life is gone, and I have let
The years slip from me and have not fulfilled
The asperations of my youth, to build
Some tower of song with lofty parapet.
Not indolence, nor pleasure, nor the fret
Of restless passions that would not be stilled,
But sorrow, and a care that almost killed,
Kept me from what I may accomplish yet;
Though, half-way up the hill, I see the Past
Lying beneath me with its sounds and sights,–
A city in the twilight dim and vast,
With smoking roofs, soft bells, and gleaming lights,–
And hear above me on the autumnal blast
The cataract of Death far thundering from the heights.