Lena Yaller, was 19 years old and sewed on the 9th floor:

My dressing room was near the elevator near Washington Place, so as soon as I took my pocketbook I had heard a girl holler “Fire!.”  I wanted to turn my face so then I seen this girl- you know, she was a very jolly girl. She used to like very much to fool us, often saying “Here comes the boss,” “Here comes the floorlady”–and there was nothing.  So when I 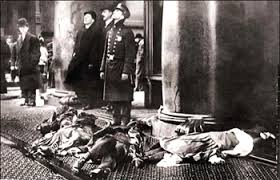 turned my face and I saw she is the one, why than I didn’t pay any attention to her afterwards.  Just continued my work in the dressing room.

When I got near the dressing room, then smoke was coming up all around us, in my face and in all the windows, up by all the windows, so I wanted to run my face back.  I saw flames coming up from the Greene Street side.  I wanted to turn around to Greene Street, so instead of going to Greene Street the girls were crowded around that place waiting for the Washington elevator, because I seen all the girls were out at that Washington Place.  They pushed me into the dressing room, so I could not see anything else.

It got very dark and I felt a draft so I wanted to go out, so I seen some breezes coming out from someplace, so I wanted to make my way over to see where it came from.  I seen it came from the Greene Street window.  Near the Greene Street it was a window and there is was near the elevator, so I wanted to and made my way through the door I wanted.  As soon as I pass I seen the examining tables were all burning.  As I was passing by I seen smoke.  You can see everything burning and I seen the rest of the girls remained in the dressing room, so when I passes the window I opened the window.  The window, I saw, opened down, so I wanted to open the window.  It opened double, and opened out, and so I burned my knee from the steam heat, so I turned back and stood there about two or three minutes.

All the people what I left in the dressing room are all dead….