When I arrived at their camp I went directly to General Miles and told him how I had been wronged, and that I wanted to return to the United States with my people, as we wished to see our families, who had been captured and taken away from us.

“The President of the United States has sent me to speak to you. He has heard of your trouble with the white men, and 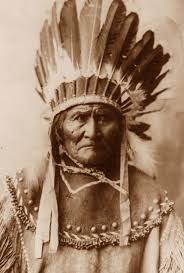 So General Miles told me how we could be brothers to each other. We raised our hands to heaven and said that the treaty was not to be broken. We took an oath not to do any wrong to each other or to scheme against each other.

Then he talked with me for a long time and told me what he would do for me in the future if I would agree to the treaty. I did not greatly believe General Miles, but because the President of the United States had sent me word I agreed to make the treaty, and to keep it. Then I asked General Miles what the treaty would be.

“I will take you under Government protection; I will build you a house; I will fence you much land; I will give you cattle, horses, mules, and farming implements. You will be furnished with men to work the farm, for you yourself will not have to work. In the fall I will send you blankets and clothing so that you will not suffer from cold in the winter time.

“There is plenty of timber, water, and grass in the land to which I will send you. You will live with your tribe and with your family. If you agree to this treaty you shall see your family within five days.”

I said to General Miles:

“All the officers that have been in charge of the Indians have talked that way, and it sounds like a story to me; I hardly believe you.”

“This time it is the truth.”

“General Miles, I do not know the laws of the white man, nor of this new country where you are to send me, and I might break the laws.”

“While I live you will not be arrested.”

Then I agreed to make the treaty. (Since then I have been a prisoner of war, I have been arrested and placed in the guardhouse twice for drinking whisky.)

We stood between his troopers and my warriors. We placed a large stone on the blanket before us. Our treaty was made by this stone, as it was to last until the stone should crumble to dust; so we made the treaty, and bound each other with an oath.

I do not believe that I have ever violated that treaty; but General Miles never fulfilled his promises.

When we had made the treaty General Miles said to me:

“My brother, you have in your mind how you are going to kill me, and other thoughts of war; I want you to put that out of your mind, and change your thoughts to peace.”

Then I agreed and gave up my arms. I said:

“I will quit the war path and live at peace here after.”

Then General Miles swept a spot of ground clear with his hand, and said:

“Your past deeds shall be wiped out like this and you will start a new life.”