The day after he took the oath of office as the 33rd President, Truman addressed the White House reporters: “Boys, if you ever pray, pray for me now. I don’t know if you fellas ever had a load of hay fall on you, but when they told me what happened yesterday, I felt like the moon, the stars, and all the planets had fallen on me.”

What Harry Truman didn’t realize at the time, but would soon find out, as he moved into the Executive Mansion, was 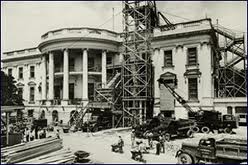 that the very structure of the White House was about to fall on him as well. Shortly after moving in to his new residence, Truman started noticing signs that the building was under serious physical stress. He complained of drafts and unusual popping and creaking noises in the old house. When he wrote to his wife Bess, back home in Missouri, Truman often joked of the “ghosts” that inhabited the White House.

“The damned place is haunted, sure as shootin. . . . You and Margie had better come back and protect me before some of these ghosts carry me off.”
“The floors pop and the drapes move back and forth. I can just imagine old Andy and Teddy having an argument over Franklin.”

Early in 1948, in response to the President’s concerns, engineers confirmed that the White House was indeed in a serious state. Built in 1800, the mansion had been burned to the walls in 1814 (during the war of 1812), and then structurally compromised over the years by the additions of indoor plumbing, gas lighting, electric wiring, heating ducts, and major modifications in 1902 and 1927.

The house was declared to be in imminent danger of collapse. The addition of a steel roof and full third floor in 1927 had added more weight than the building could handle. Wooden beams had been weakened by cutting and drilling for plumbing and wiring. The heavy ceiling of the East Room was found to be sagging as much as 18 inches, the marble grand staircase was about to fall down, the mansion’s plumbing was “makeshift and unsanitary” and the president’s bathtub was sinking into the floor.

While the cost to just tear down and rebuild the White House was found to be cheaper than a full restoration, Truman deemed the ‘cultural’ value of the original structure more valuable than the cost savings of a tear-down.

So in December of 1948, President Truman moved back into Blair House across the street and as a multi-year renovation that would cost $5.7 million was commenced.

Crews began dismantling the interior, saving much of the wood trim, doors, and hardware for re-use. 126 new 25-feet-deep concrete columns were poured to provide support for the exterior walls. By the autumn of 1950, the White House was just a cavernous hollow space, 165 feet long, 85 feet wide, and 80 feet high.

In a little more than 15 months a new White House was constructed within the walls of the original. A new steel framework was built to support all the interior rooms. New wiring, plumbing, ductwork, and other utilities were installed throughout the structure as concrete floor slabs and then interior walls began to take shape.

On the evening of March 27, 1952, in a small ceremony at the entrance door, President Truman was welcomed back and presented with a gold key to the newly-renovated White House. After spending more than three years living in the Blair House a block to the North, the first family returned home.