This day began early because Lynda was coming in on “the red-eye special” from California, about 7am, having kissed Chuck  good-bye at Camp Pendelton last night as he departed for Vietnam.

I wanted to be right there at the door with open arms to meet her, but I begged Lyndon not to get up. “No, I want to,” he insisted. So the operator called us in what seemed the gray early morning and both of us were downstairs at the entrance to the Diplomatic Reception Room at 7 when she stepped out of the car. She looked like a ghost – pale, tall and drooping. We both hugged her and then we all went upstairs. I took her into her room, helped get her clothes off, and put her to bed. She’d had a sedative on the plane, slept a little, not much – and it was, I think partly emotion and partly the sedative that made her look so detached, like a wraith from another world.

She said, “Mother, they were awful – they kept on pushing and shoving to get to us, and they almost ran over a child. And there were lots of other wives there, saying good-bye to their husbands!” She meant the press. 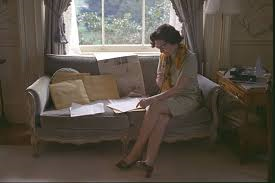 When I went back to Lyndon’s room, his face was sagging and there was such pain in his eyes as I had not seen since his mother died. But he didn’t have time for grief. Today was a crescendo of a day. At 9 in the evening, Lyndon was to make his talk to the nation about the war. The speech was not yet firm. There were still revisions to be made and people to see. But he began to put on his clothes and got ready to go to church with Luci and Pat, something he does more and more often.

And I, exhausted, went back to bed, where I half-slept for a couple of hours.

On the way from church, Lyndon stopped to see the Vice President at his apartment. Hubert and Muriel are leaving for Mexico, for a ceremony, sometime during the day. It was a day of coming and going – and it’s hard to remember when what happened. Sometime during the morning Buzz came in, took up his place in the Treaty Room, and began to work on the speech. I had spent a good part of Saturday and part of Friday making suggestions on it myself. I read it over again for what was the umpteenth time, and then (I believe I was in his bedroom), Lyndon said to Arthur and Mathilde Krim and me, “What do you think about this? This is what I’m going to put at the end of the speech.” And he read a beautifully written statement which ended, “Accordingly, I shall not seek and I will not accept the nomination of my party for another term as your President.”

The four of us had talked about this over and over, and hour after hour, but somehow we all acted and felt stunned. Maybe it was the calm finality in Lyndon’s voice, and maybe we believed him for the first time. Arthur said something like, “You can’t mean this!” And Mathilde exclaimed in an excited way, “Oh no, no!” Then we all began to discuss the reasons why, and why not, over and over again…

Mathilde’s eyes were full of tears, and Luci had obviously been crying forthrightly. Lyndon seemed to be congealing into a calm, quiet state of mind, out of reach. And I, what did I feel? … so uncertain of the future that I would not dare to try to persuade him one way or the other. There was much in me that cried out to go on, to call on every friend we have, to give and work, to spend and fight, right up to the last. And if we lost, well and good – we were free! But if we didn’t run, we could be free without all this draining of our friends. I think what was uppermost – what was going over and over in Lyndon’s mind – was what I’ve heard him say increasingly these last months: “I do not believe I can unite this country.”