When Nathaniel Hawthorne’s father sailed from Calcutta for New York in December 1795, he didn’t notice anything unusual on the ship America until the ship put in at St. Helena for resupply. His log for the day noted “This day begins with moderate breezes . . . latter part employed in landing 23 sacks of coffee . . . took on board several pumpkins and cabbages, some fresh fish for ship’s use, and greens for the elephant.” Below is written in large letters “ELEPHANT ON BOARD.” 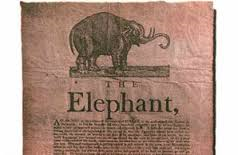 The America proceeded to the island of Ascension, where the men got several turtles and saw a large sea lion, and then it was six weeks at sea. Fortunately for the exotic cargo, the voyage proved remarkably calm. Except for a few squalls, no storms were recorded.

When the ship arrived in port in mid-April, it stirred up considerable interest. A New York paper announced “The Ship America, Captain Jacob Crowninshield of Salem, Massachusetts, Commander and owner, has brought home an elephant from Bengal in perfect health. It is the first ever seen in America and is a great curiosity. It is a female, two years old.”

Jacob Crowninshield took credit, writing: “We take home a fine young elephant two years old, at $450.00. It is almost as large as a very large ox, and I dare say we shall get it home safe, if so it will bring at least $5000.00. We shall at first be obliged to keep it in the southern states until it becomes hardened to the climate.
“I suppose you will laugh at this scheme, but I do not mind that, will turn elephant driver. We have plenty of water at the Cape and St. Helena. This was my plan. Ben did not come into it, so if it succeeds, I ought to have the whole credit and honor too; of course you know it will be a great thing to carry the first elephant to America.”

The elephant was taken south for the winter, and then brought to Philadelphia in April, 1798. Mr. E. Savage, one of America’s earliest showmen, exhibited the elephant in Boston on June 25, 1804, and on July 3 it was again in Salem and on view at the Sun Tavern.

The elephant was named “Old Bet” and was eventually acquired by Hachaliah Bailey (the Bailey of Barnum and Bailey Circus fame). The Bailey Circus consisted of four wagons, a trained dog, several pigs, a horse, and the elephant. Bailey toured the country for several years with Old Bet as his chief attraction, and when he returned to his home in Somers NY in 1824, he built the hotel that is still known as the Elephant Hotel.

It is unclear what became of Old Bet. Some say she was killed by a crank in Maine who felt that the animal was taking money from the public. Another story relates, “A boy was induced to secrete himself as she passed on the road and to test the story that her hide was bullet proof. He did so, the shot hit her in the eye and instantly killed her.” The Boston Herald in1895 claimed that Old Bet was maliciously killed in Rhode Island in 1816, while a writer to the Herald claimed that Old Bet was killed in North Carolina in 1827.

In any case, Bailey erected a monument to Old Bet, an elephant carved in wood and standing on a shaft of dressed granite, on the green in front of the Elephant Hotel at Somers, New York.

In 1922, about a century after Old Bet’s death, “Old John,” the star of the performing elephants of Ringling Brothers, Barnum and Bailey Circus, took a wreath on his trunk and placed it on the monument of Old Bet at Somers Village, while the village children had a holiday and sang the Star Spangled Banner.