I arrived at Ford’s Theatre about 8¼ P.M. April 14/65 and procured a seat in the dress circle about 40 feet from the President’s Box.  The play was then progressing and in a few minutes I saw the President, Mrs Lincoln, Major Rathbone and Miss Harris enter; while proceeding to the Box they were seen by the audience who cheered which was reciprocated by the President and Mrs Lincoln by a smile and bow… 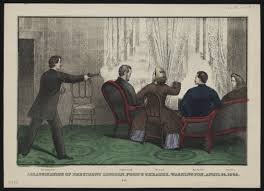 The theatre was well filled  and the play of “Our American Cousin” progressed very pleasantly until about half past ten, when the report of a pistol was distinctly heard and about a minute after a man of low stature with black hair and eyes was seen leaping to the stage beneath, holding in his hand a drawn dagger.

While descending his heel got entangled in the American flag, which was hung in front of the box, causing him to stumble when he struck the stage, but with a single bound he regained the use of his limbs and ran to the opposite side of the stage, flourishing in his hand a drawn dagger and disappearing behind the scene.

I then heard cries that the ‘President had been murdered,’ which were followed by those of ‘Kill the murderer’ ‘Shoot him’ etc. which came from different parts of the audience.

I immediately ran to the Presidents box and as soon as the door was opened was admitted and introduced to Mrs. Lincoln when she exclaimed several times, ‘O Doctor, do what you can for him, do what you can!’ I told her we would do all that we possibly could.

When I entered the box the ladies were very much excited.  Mr. Lincoln was seated in a high backed arm-chair with his head leaning towards his right side supported by Mrs. Lincoln who was weeping bitterly.  Miss Harris was near her left and behind the President.

While approaching the President I sent a gentleman for brandy and another for water.

When I reached the President he was in a state of general paralysis, his eyes were closed and he was in a profoundly comatose condition, while his breathing was intermittent and exceedingly stertorous.

I placed my finger on his right radial pulse but could perceive no movement of the artery.  As two gentlemen now arrived, I requested them to assist me to place him in a recumbent position, and as I held his head and shoulders, while doing this my hand came in contact with a clot of blood near his left shoulder.

Supposing that he had been stabbed there I asked a gentleman to cut his coat and shirt off from that part, to enable me if possible to check the hemorrhage which I supposed took place from the subclavian artery or some of its branches.

Before they had proceeded as far as the elbow I commenced to examine his head (as no wound near the shoulder was found) and soon passed my fingers over a large firm clot of blood situated about one inch below the superior curved line of the occipital bone.

The coagula I easily removed and passed the little finger of my left hand through the perfectly smooth opening made by the ball, and found that it had entered the encephalon.

As soon as I removed my finger a slight oozing of blood followed and his breathing became more regular and less stertorous.  The brandy and water now arrived and a small quantity was placed in his mouth, which passed into his stomach where it was retained.

Dr. C. F. Taft and Dr. A. F. A. King now arrived and after a moments consultation we agreed to have him removed to the nearest house, which we immediately did, the above named with others assisting.

When we arrived at the door of the box, the passage was found to be densely crowded by those who were rushing towards that part of the theatre.  I called out twice ‘Guards clear the passage,’ which was so soon done that we proceeded without a moments delay with the President and were not in the slightest interrupted until he was placed in bed in the house of Mr Peterson, opposite the theatre, in less than 20 minutes from the time he was assassinated.