Well, so Big Man at Washington was made another rule like that one about making the Injin cut his hair off short like a 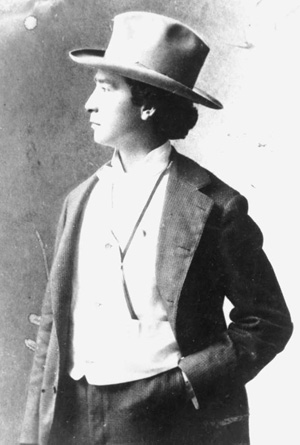 prize fighter or saloon keeper. Big Man he was say this time the Injin was had to change his name just like if the marshal was had a writ for him. So, if the Injin’s name is Wolf Warrior, he was had to call himself John Smith, or maybe so Bill Jones, so nobody else could get his mail out of the post office. Big Man say Injin name like Sitting Bull or Tecumseh was too hard to remember and don’t sound civilized, like General Cussed Her or old Grand Pa Harry’s Son.

Hotgun he say the Big Man’s rule was heap worse than allotment, and Crazy Snake he say he was hear white man say all time you could take everything away from a him but you cou1d’nt steal his good name.

Guess so that was alright ’cause they was nothing to a name nohow if you can’t borrow some money on it at the bank. Tookpafka Micco he say he was druther had a deed to his land than a big name in the newspaper. When I ask him what he do after he sell his land, he say he don’t know, like Bob Ingersoll. Then he say he was let the future take care of its own self like a calf when it was get too old to suck. Guess so Tookpafka Micco was made up his mind to drink sofky and eat sour bread and be glad like a young cat with a ball a yarn before the fire place in the winter time.

Well, so we hear lots a talk about big progress in Creek nation and read about it in the newspaper before breakfast time. They was good news all time about long stride and development and things like that till you can’t make a crop and get out of the hole if you was try to hear all of it. Hotgun he say he think he was had to put beeswax in his ears like Few Leases (Ulysses) in olden time.

But look like you don’t hear nothing about fullblood Injins ‘way back behind the hills that was had they sofky patch and cabin on land that was done filed on by some half-breed or maybe so white man that was had a right. We don’t hear nothing about them kind a Injin at all. But we hear all time about some fellow that was find a coal mine with a post auger, or maybe so some other fellow that was strike oil that was shoot up like a squirrel gun soon as he touch it.

Fus Fixico was the penname of Alexander Posey (1873-1908), a Wind Clan member of the Muskogee Creek Tribe. Posey was raised speaking only Muscogee, but when he was fourteen his father sent him to Bacone Indian University in Muskogee.

The Fus Fixico letters offered sharp commentary at a time when Creek lands were being broken up and tribal governments destroyed as the Indian Territory transitioned into the state of Oklahoma. Posey led a group of politicians from the Five Civilized Tribes in an attempt to create an indigenous-controlled State of Sequoyah, but their proposals were rebuffed.

Various US newspapers proposed syndicating the Fus Fixico letters nationwide, but Posey refused. He didn’t believe a non-Native audience would understand his humor.