It was less than two weeks since the murder of Abraham Lincoln at Ford’s Theater and the country was still reeling. The Civil War was slowly, violently, limping to a close.

The Sultana was a typical side-wheeled coal-burning steamboat. Weighing 1,719 tons, the steamer carried a crew of 85 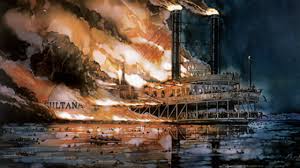 and had a legal capacity to carry 376 passengers, and hauled cotton and other freight between St. Louis and New Orleans. The Sultana left New Orleans on April 21, 1865 with about a hundred passengers and a load of livestock bound for St. Louis. When the steamship stopped at Vicksburg, it was excitedly greeted by over two thousand Union veterans swarming the docks.

The soldiers had just been released from the Cahaba Prison Camp in Alabama and Andersonville Prison in Georgia and were desperate to rejoin their families – but the Sultana was not prepared to take them up river. Upon tying up at Vicksburg the ship’s engineer had discovered leaks in the boilers. The captain instructed that the defective section of boiler plate be quickly removed, and a patch plate riveted in its place, so that the repair only took one day (replacing the boiler completely would have taken three days).

With the patch complete, the Sultana proceeded to board the throng of veterans, many of whom were weak and ill from the horrific conditions in the prison camps. They packed into every available space on the open decks and were anxious for the voyage to begin; it had been years since they’d seen their homes in Ohio, Indiana, Michigan, Kentucky, or Tennessee.

The ship departed, then stopped again in Memphis, and made a few more repairs. At about 1:00 a.m. on April 27, the dangerously overloaded steamboat proceeded up-river toward Cairo, Illinois.

An hour later, 7 miles north of Memphis, a boiler gave way, causing a huge explosion that tore the center out of the boat, throwing sleeping men high into the air before landing in the river. The violent steam-blast scalded many; many others leapt into the river to face hours in the dark, frigid water listening to the shrieks and cries of the injured and dying.

The exact death toll remains unknown. The official number of deaths is recorded as 1,547, but many believe the number could be as high as 1,800, making the Sultana disaster even more terrible than the Titanic tragedy.

The first boat on the scene (an hour after the explosion) was the southbound steamer Bostonia II, which rescued scores of survivors.  The steamer Arkansas, the Jenny Lind, the Essex, and the Navy gunboat USS Tyler joined the rescue.

What was left of the Sultana drifted to the west bank of the Mississippi and sank about dawn off of Mound City, Arkansas. Local citizens rescued victims floating by in the river and others who drifted into the trees on the flooded Arkansas shore. About 800 survivors, many with horrible burns, were transported to hospitals in Memphis, where many died later from burns or exposure. Bodies continued to be found downriver for months, some as far as Vicksburg.

Newspaper accounts record that the people of Memphis had sympathy for the victims despite the fact that they had recently been enemies. The Chicago Opera Troupe, which was traveling through Memphis, staged a benefit; the crew of the Essex raised $1,000, and the mayor took in three survivors.