as recorded by William Maclay, Senator from Pennsylvania

This is a great, important day. Goddess of etiquette, assist me while I describe it. …

Turned into the Hall. The crowd already great. The Senate met. The Vice-President rose in the most solemn manner. 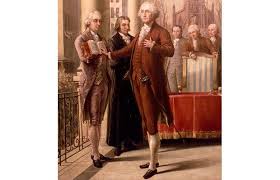 This son of Adam seemed impressed with deeper gravity, yet what shall I think of him? He often, in the midst of his most important airs–I believe when he is at loss for expressions (and this he often is, wrapped up, I suppose, in the contemplation of his own importance) — suffers an unmeaning kind of vacant laugh to escape him. This was the case to-day, and really to me bore the air of ridiculing the farce he was acting.

“Gentlemen, I wish for the direction of the Senate. The President will, I suppose, address the Congress. How shall I behave? How shall we receive it? Shall it be standing or sitting?”

Here followed a considerable deal of talk … Mr. Lee began with the House of Commons (as is usual with him), then the House of Lords, then the King, and then back again. The result of his information was, that the Lords sat and the Commons stood on the delivery of the King’s speech. Mr. Izard got up and told how often he had been in the Houses of Parliament. He said a great deal of what he had seen there. He made, however, this sagacious discovery, that the Commons stood because they had no seats to sit on…

The Speaker was introduced, followed by the Representatives. Here we sat an hour and ten minutes before the President arrived–this delay was owing to Lee, Izard, and Dalton, who had stayed with us … instead of going to attend the President. The President advanced between the Senate and Representatives, bowing to each. He was placed in the chair by the Vice-President …. The Vice-President rose and addressed a short sentence to him. The import of it was that he should now take the oath of office as President. He seemed to have forgot half what he was to say, for he made a dead pause and stood for some time, to appearance, in a vacant mood. He finished with a formal bow, and the President was conducted out of the middle window into the gallery, and the oath was administered by the Chancellor.

Notice that the business done was communicated to the crowd by proclamation, etc., who gave three cheers, and repeated it on the President’s bowing to them.

As the company returned into the Senate chamber, the President took the chair and the Senators and Representatives their seats. He rose…and addressed them. This great man was agitated and embarrassed more than ever he was by the leveled cannon or pointed musket. He trembled, and several times could scarce make out to read, though it must be supposed he had often read it before. He put part of the fingers of his left hand into the side of what I think the tailors call the fall of the breeches, changing the paper into his left hand. After some time he then did the same with some of the fingers of his right hand. When he came to the words “all the world”, he made a flourish with his right hand, which left rather an ungainly impression. I sincerely, for my part, wished all set ceremony in the hands of the dancing-masters, and that this first of men had read off his address in the plainest manner, without ever taking his eyes from the paper, for I felt hurt that he was not first in everything. He was dressed in deep brown, with metal buttons, with an eagle on them, white stockings, a bag, and sword.

From the hall there was a grand procession to Saint Paul’s Church, where prayers were said by the Bishop. The procession was well conducted and without accident, as far as I have heard. The militia were all under arms, lined the street near the church, made a good figure, and behaved well.