May 15, 1817: Founding of the Friends Asylum for the Relief of Persons Deprived of the Use of Their Reason

For a shilling, early 18th-century Philadelphians could visit Pennsylvania Hospital on a Sunday afternoon and gawk at the mad men and women, chained and raving in the dank hospital basement.

It was good entertainment, but the public display of lunatics offended the moral senses of the Quakers who preached 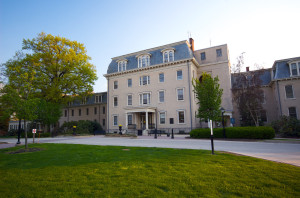 that God dwells within every man. The Quakers sincerely believed that “in every man there is a ‘divine principle’ and nothing, be it slavery, poverty, or insanity, should prevent that man from obeying that principle.” Insanity was merely another obstacle to be removed from the road to inward enlightenment and, like slavery and poverty, curable.

It was this belief that led the Philadelphia Quakers in 1813 to found the first private psychiatric hospital in the United States, the Friends Asylum for the Relief of Persons Deprived of the Use of Their Reason. There the Quakers practiced a method of care that came to be known as the ”moral treatment” of the insane. In so doing, they laid the foundation for modern psychiatric medicine in the United States.

The Quakers prescribed that mental patients be released from their chains and given private rooms, each with a window. Compassion and conversation, forerunners of modern psychoanalysis, were the cornerstones of treatment. Then, as now, patients were allowed to stroll about the wooded grounds and work in the hospital’s gardens.

From the earliest days, Friends Hospital utilized occupation as a curative for patients: men worked on the farm that helped sustain the hospital community, while women worked in kitchen gardens, weaving, or otherwise contributing to the community. Thus, the concept of occupational therapy was born. Horticultural therapy also originated at Friends Hospital which had patient greenhouses in the mid-1800s. In an age before psychiatric medication, Friends physicians embraced other cutting-edge treatments, such as hydrotherapy, in order to ease patients’ suffering.

Patients are still brought up the circular driveway and into the hospital through the massive double doors of the old building, much as they were 175 years ago.

”No matter how disturbed or violent a patient is, we don’t bring them in by a back way. They come in the front door and we tell them that they will leave by the front door. That is our way of treating everyone equally and with dignity.”