Homer Plessy wasn’t really a BLACK man. His light skin reflected the fact that his grandfather Germain Plessy was a white Frenchman, born in Bordeaux. Homère Patrice Plessy could best be described as a Creole, that peculiar half-French caste ubiquitous to the bayou country of Louisiana. He had only an eighth part African blood (qualifying him as an Octoroon) and he was light skinned enough to easily pass as white.

At age thirty, Homer Plessy had a career as a shoemaker and a commitment to fight for civil rights. He joined the 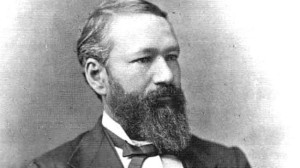 Comité des Citoyens, a group of African Americans, whites, and Creoles which vigorously opposed Louisiana’s segregation laws. Homer didn’t have great gifts of oratory or legal skills, but his one attribute of being sufficiently light skinned to pass for white helped him challenge the “Separate Car Act” which New Orleans had recently enacted segregating public transportation.

On June 7, 1892, Plessy bought a first-class ticket on the East Louisiana Railroad running from New Orleans to Covington, and took a seat in the “whites-only” passenger car. When the conductor came to collect his ticket, Plessy informed him that he was only 7/8 white and that he refused to sit in the “blacks-only” car. Plessy was immediately arrested and put into the Orleans Parish jail.

Plessy’s case came before Judge John Howard Ferguson. The Comité’s lawyer, Albion W. Tourgée argued that Plessy’s civil rights had been violated, as granted by the Thirteenth and Fourteenth amendments of the U.S. Constitution. Judge Ferguson denied this argument and ruled that Louisiana, under state law, had the power to regulate railroad business within its borders.
The Louisiana State Supreme Court affirmed Ferguson’s ruling and refused to grant a rehearing, but it did allow a petition for writ of error. This petition was accepted by the United States Supreme Court and four years later, in April 1896, arguments for Plessy v. Ferguson were heard.

Tourgée argued that the state of Louisiana had violated both the Thirteenth Amendment that granted freedom to the slaves, and the Fourteenth Amendment that stated, “no state shall make or enforce any law which shall abridge the privileges or immunities of citizens of the United States; nor shall any state deprive any person of life, liberty, and property, without due process of law.”

On May 18th, Justice Henry Billings Brown delivered the majority opinion in favor of the State of Louisiana:
“The object of the Fourteenth Amendment was undoubtedly to enforce the absolute equality of the two races before the law, but in the nature of things it could not have been intended to abolish distinctions based on color, or to enforce social, as distinguished from political equality, or a commingling of the two races upon terms unsatisfactory to the either. … If the two races are to meet upon terms of social equality, it must be the result of voluntary consent of the individuals.”

The lone dissenting vote was cast by Justice John Marshall Harlan:
“In view of the constitution, in the eye of the law, there is in this country no superior, dominant, ruling class of citizens. There is no caste here. Our constitution is color-blind, and neither knows nor tolerates classes among citizens. In respect of civil rights, all citizens are equal before the law. The humblest is the peer of the most powerful. The law regards man as man, and takes no account of his surroundings or of his color when his civil rights as guaranteed by the supreme law of the land are involved.”