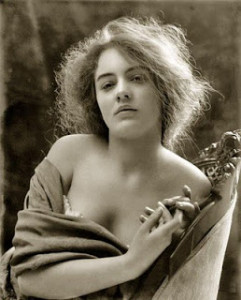 “Good God, Harry! What have you done?”

Evelyn Nesbit was only 15 when she arrived in New York City in December of 1900 but with her luminous eyes and sensuous lips she became an overnight …sensation. She started out as an artist’s model for painters and sculptors; soon she was posing for photographers and magazine illustrators. Within a year Evelyn was singing and dancing in the hit musical “Florodora” and became the talk of the town.

It didn’t take long for Evelyn to be introduced to Stanford White, the leading arbiter of taste of the day. The 47-year-old architect showered the chorus girl with gifts and money, while assuring her mother that his interests were purely wholesome.

One evening “Stanny” ushered Evelyn to his secret 24th Street apartment, and introduced the sixteen-year-old Evelyn to a forest green room illuminated by concealed lighting with “a gorgeous swing with red velvet ropes … set high in the ceiling at one end of the studio.” White said, “Let’s put this little kid in the swing,” and Evelyn jumped on enthusiastically. She would ride the swing again many times, sometimes clothed, and sometimes not.

“Stanny” then escorted her to “the mirror room,” paneled entirely with mirrors. Entranced by her opulent surroundings, Evelyn drank champagne, changed into a yellow silk kimono, and remembered nothing else until she awoke in bed the next morning, her virginity gone.

There were more steamy nights spent on tiger rugs before blazing fires, but before long, Stanford White’s restless appetite moved on to other conquests. Evelyn fell hard for young John Barrymore, but her mother considered his prospects limited. A fantastically wealthy young railroad heir from Pittsburgh by the name of Harry K. Thaw then came into the picture.

Dark-haired and baby-faced, Thaw blamed Stanford White for keeping him out of some of New York’s toniest clubs. He became obsessed over Evelyn, sitting through 40 performances of “The Wild Rose” just to watch her on stage. He proposed multiple times, but she rejected him, knowing she could never marry without admitting her less-than-reputable sexual past. Mad with frustration, he demanded to know why she wouldn’t accept and pried from her every excruciating detail of that night in the mirror room.

Stanford White knew that Thaw was unstable and a cocaine addict, and warned Evelyn to stay away from him, but Evelyn’s thirst for financial stability overcame her. She married Harry on April 4, 1905; they settled in Pittsburgh, and Harry took up as his solemn duty a crusade to expose Stanford White for the ruinous monster that he perceived him to be.

On June 25, 1906, Harry and Evelyn stopped in New York before embarking on a European vacation. They purchased tickets to “Mam’zelle Champaigne,” opening that night at the roof-top theater atop the Madison Square Garden. Before the show, they dined at Cafe Martin a block west of the Garden. There, too, dined none other than Stanford White, and Harry K. Thaw stewed over the sight of his wife’s despoiler.

At 10:55 PM, as the show was concluding, Stanford White finally arrived and took his usual table in the front row. Evelyn, anxious to avoid a scene, tried to pull Harry toward the elevators to leave, but he pulled away and marched straight up to White.

White must have seen Thaw approaching, but he made no move. Thaw placed the pistol almost against the head of the sitting man and fired three shots in quick succession. White’s elbow slid from the table, the table crashed over, sending a glass clinking along with the heavier sound. The body then tumbled from the chair.