It was a hot June day and several members of the Pritchard family were sitting on their porch near Wellington, Texas when they heard a speeding car roaring up the highway. As they watched attentively, the Ford coupe blew past the detour for the bridge that had been washed out, and plunged off the river embankment into the ravine below. 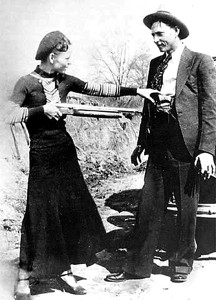 The Pritchard men rushed to the car, just as a spark ignited the leaking fuel, and pulled two men and a badly burned woman (along with a small arsenal of firearms) out of the wreckage as they tried to douse the smoking car with river water.

The men were “skinned up a little,” but the girl was in bad shape. Jack Pritchard remembered hauling her from the car and into the house. “She was not a very big girl, but she was all limber and kind of hard to carry,” he said. “We was afraid she was dying, and they would not tell us who they were, but said, ‘We are as hot as we can be and can’t afford to have a doctor.’”

Alonzo Cartwright, Pritchard’s son-in-law, drove into Wellington to get a doctor while Mrs. Pritchard treated the young woman with bicarbonate of soda and bandages. They had no idea that their unexpected visitors were the infamous Bonnie Parker, Clyde Barrow and W.D. Jones, who were wanted for a series of killings and bank robberies.

“The Barrow brothers didn’t mean anything to me,” Sam Pritchard later told his wife. “All I knew was they were hurt and needed help, so we just naturally had to help them.”

Collingsworth County Sheriff George Corry and Police Chief Paul Hardy soon arrived at the Pritchard home. Bonnie Parker lay seemingly unconscious on a bed. When the officers entered the home, Clyde and W.D. burst from the bedroom and grabbed their guns. During the excitement, when Gladys Cartwright, holding a baby in one arm, reached over to latch a door, W.D. fired his shotgun and buckshot ripped through Mrs. Cartwright’s hand.

The panicking outlaws headed for the door, but before leaving, Clyde Barrow thumbed through a roll of bills and offered to pay “for all the trouble we’ve been to you.”

Sam Pritchard replied, “No, if a man can’t help another man, things are in pretty bad shape.”

The trio then shot out the tires on the family cars, handcuffed the sheriff and the police chief and loaded them into the back of the sheriff’s car with the badly burned Bonnie lying across their laps, and drove into Oklahoma.

There they met up with their gang-mates Buck and Blanche. Buck asked Clyde if he was going to kill the cops, but Clyde had grown fond of them from the kindness and comfort that they had shown toward Bonnie.

Buck pulled the cops from the car and tied them to a tree with barbed wire. Clyde got behind the wheel of Buck’s V8, loaded up the gang, and headed east to Fort Smith, Arkansas.