At various intervals during the two long and bitter years I have spent in the Death House at Sing Sing, I have had the impulse to address myself to the President of the United States. Always, in the end, a certain innate shyness, an embarrassment almost, comparable to that which the ordinary person feels in the presence of the great and the famous, prevailed upon me not to do so… 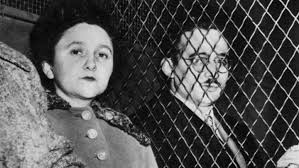 My own land is a part of me, I should be homesick for her anywhere else in the world. And Dwight D. Eisenhower was “Liberator” to millions before he was ever “President.” It does not seem reasonable to me, then, that a letter concerning itself with condemned wife as well as condemned husband, should not merit this particular President’s sober attention…

It is chiefly the death sentence I would entreat you to ponder. I would entreat you to ask yourself whether that sentence does not serve the ends of “force and violence” rather than an enlightened justice. Even granting the assumption that the convictions had been properly procured (and there now exists incontrovertible evidence to the contrary), the steadfast denial of guilt, extending over a protracted period of solitary confinement and enforced separation from our loved ones, makes of the death penalty an act of vengeance.

As Commander-in-Chief of the European theatre, you had ample opportunity to witness the wonton and hideous tortures that such a policy of vengeance had wreaked upon vast multitudes of guiltless victims. Today, while these ghastly mass butchers, these obscene racists, are graciously receiving the benefits of mercy and in many instances being reinstated in public office, the great democratic United States is proposing the savage destruction of a small unoffending Jewish family, whose guilt is seriously doubted throughout the length and breadth of the civilized world!

As you have recently so wisely declared, no nation can chance “going it alone.” That, Mr. President, is truly the voice of the sanity and of the leadership so sorely needed in these perilous times. Surely you must recognize then, that the ensuing damage to the good name of our country, in its struggle to lead the world toward a more equitable and righteous way of life, should not be underestimated.