“The people of Texas are informed that in accordance with a Proclamation from the Executive of the United States, all slaves are free. This involves an absolute equality of rights and rights of property between former masters and slaves, and the connection heretofore existing between them becomes that between employer and free laborer.” 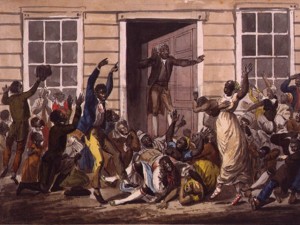 After the fall of New Orleans in 1862, slave owners in Mississippi, Louisiana and points east headed to Texas to escape the Union Army’s reach. More than 150,000 slaves were herded west and for a while “It looked like everybody in the world was going to Texas.”

It was two and a half years after President Lincoln’s Emancipation Proclamation – which became official January 1, 1863 – and two months after the surrender of General Lee in April of 1865, that Major General Gordon Granger landed a force of Union soldiers at Galveston, Texas with news that the war had in fact ended and that the enslaved were now free.

It is not entirely clear why it took two and a half years for this good news to reach Texas. Some say a messenger was murdered on his way to Texas with the news of freedom. Others say that the news was deliberately withheld, and that the federal troops waited for the last cotton harvest to be completed before proceeding to Texas to enforce the Emancipation Proclamation.

At any rate, on “Juneteenth”, June 19th, 1865, the slaves of Texas finally learned that they were finally free, and while many were shocked, disoriented, and fearful of their uncertain future, the liberated slaves of Texas burst into a spontaneous ecstatic celebration of their moment of freedom – of their biblical moment of Jubilee.

They tossed their ragged clothing into the creeks and looted fine clothing from the plantations belonging to their former ‘masters’. They whooped and hollered and bored holes in trees with augers and stopped them up with gunpowder and blasted away in celebration. The feasted on pig roasts and sang hymns of joy.

“Juneteenth” soon took root in many African-American communities as an annual commemoration of this joyous day. Celebrants dressed in their finest clothes, publicly read the Emancipation Proclamation, sang spirituals and trumpeted the news of liberty, with speakers and church services and sermons and parades with the Goddess of Liberty on floats and in living tableaux.

“Juneteenth” celebrations take place all across the country today. The good news of freedom is proclaimed; God is praised in his heaven; strawberry soda-pop is drunk by the gallon; and rodeos, fishing, barbecues and baseball games remind us of that precious day when all God’s children first learned that they were free.