In the early spring of 1956 Walter Winchell broadcast the news that “America’s best-known blonde moving picture star” was  now “the darling of the left wing intelligentsia, several of whom are listed as Red fronters”.

Winchell was talking, of course, about Marilyn Monroe (then filming the movie “Bus Stop”) and playwright Arthur 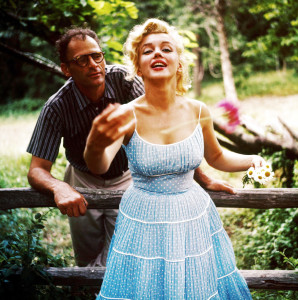 By late May the filming of Bus Stop was completed, and in early June the Reno divorce from Miller’s previous wife came through. On June 28th the Roxbury, Connecticut newspaper would make the dry announcement: “Local Resident Will Marry Miss Monroe of Hollywood”, adding, “Roxbury Only Spot in World to Greet News Calmly”.

Members of the press quickly set up camp outside Miller’s rural Connecticut farm and pursued the couple relentlessly. On June 29, the scheduled day for the wedding, the press descended on the property en-masse. In the chaos of pursuit, a car carrying Mara Scherbatoff, the New York bureau chief for Paris-Match, crashed into a tree while chasing the car in which Miller and Monroe were riding. Scherbatoff was thrown from the car and killed.

The engaged couple were devastated by the news and granted a quick press conference to mollify the 400 pressmen, and then the rattled couple sneaked off to the Westchester County Court House in White Plains, where they were married by Judge Seymour Rabinowitz in a four minute ceremony.

The bride was thirty years old; the groom was forty. Miller’s cousin, Morty Miller and his wife, witnessed the marriage. “Miss Monroe wore a sweater and a skirt and no hat,” the New York Times wrote the following day, while “Mr. Miller wore a blue suit and a white shirt but no tie.” After the ceremony, the couple “got into their sports car and disappeared into traffic.”

Within a few weeks the newlyweds were off to London to film “The Prince and the Showgirl”.

While in London Marilyn happened to look through Miller’s notebook and discovered that he feared that his creativity would be threatened by this unpredictable waif he had married. Marilyn told friends that he also wrote, “The only one I will ever love is my daughter”.

Things went steadily from bad to worse. The couple would divorce less than five years later.