It was Upton Sinclair’s novel The Jungle that brought the conditions of the Chicago meatpacking industry to the attention of the public:

“There was never the least attention paid to what was cut up for sausage; there would come all the way back from 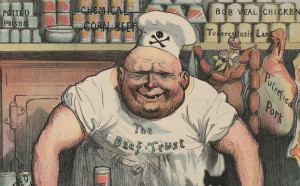 Europe old sausage that had been rejected, and that was moldy and white—it would be dosed with borax and glycerine, and dumped into the hoppers, and made over again for home consumption. There would be meat that had tumbled out on the floor, in the dirt and sawdust, where the workers had tramped and spit uncounted billions of consumption germs. There would be meat stored in great piles in rooms; and the water from leaky roofs would drip over it, and thousands of rats would race about on it. It was too dark in these storage places to see well, but a man could run his hand over these piles of meat and sweep off handfuls of the dried dung of rats. These rats were nuisances, and the packers would put poisoned bread out for them; they would die, and then rats, bread, and meat would go into the hoppers together. This is no fairy story and no joke; the meat would be shoveled into carts, and the man who did the shoveling would not trouble to lift out a rat even when he saw one—there were things that went into the sausage in comparison with which a poisoned rat was a tidbit. There was no place for the men to wash their hands before they ate their dinner, and so they made a practice of washing them in the water that was to be ladled into the sausage. There were the butt-ends of smoked meat, and the scraps of corned beef, and all the odds and ends of the waste of the plants, that would be dumped into old barrels in the cellar and left there. Under the system of rigid economy which the packers enforced, there were some jobs that it only paid to do once in a long time, and among these was the cleaning out of the waste barrels. Every spring they did it; and in the barrels would be dirt and rust and old nails and stale water—and cartload after cartload of it would be taken up and dumped into the hoppers with fresh meat, and sent out to the public’s breakfast. Some of it they would make into “smoked” sausage—but as the smoking took time, and was therefore expensive, they would call upon their chemistry department, and preserve it with borax and color it with gelatine to make it brown. All of their sausage came out of the same bowl, but when they came to wrap it they would stamp some of it “special,” and for this they would charge two cents more a pound.”