Otto Frederick Rohwedder was a jeweler by trade, but a dedicated tinkerer at heart. In 1912, while living in St Joseph, Missouri, with his wife and two children, Otto had his “Eureka!” moment which changed the history of lunch forever.

It came to Otto in a flash: What the world needed most was SLICED BREAD! 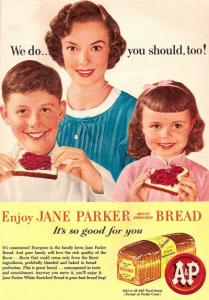 Convinced that he had hit on a great idea, Rohwedder sold his three jewelry stores and invested the money in his new venture. He assembled a prototype – it held bread slices together with hat pins – but he had a hard time convincing bakeries to adopt his contraption since the pins regularly fell out.

Otto went back to the drawing board but suffered a setback when fire destroyed the factory that contained both the blueprints and his prototype bread slicer.

By 1927 he had designed another slicing machine. This one not only sliced  loaves, but it also wrapped them in paper to keep the bread fresh and the loaf in one piece. Most bakers were again skeptical, but Frank Bench, a friend of Rohwedder’s who baked in Chillicothe, Missouri, agreed to put the bread slicer to the test.

Wonder Bread and several other major companies were soon slicing bread with Rohwedder’s machines. By 1933 sandwich bread had become a household staple and eighty percent of the bread baked in America went through the slicing machine. Sandwiches for lunch were now simple to prepare – until World War II broke out…

When America began rationing food in 1943, the Federal food administrators announced that the country would have to go without sliced bread. Government officials, in their bureaucratic wisdom, explained that “the ready-sliced loaf must have a heavier wrapping than an unsliced one if it is not to dry out.” According to the ban, no bakery or deli was permitted to slice its own bread, and American families were forced to cut loaves themselves.

The public outrage was immediate and overwhelming. Two months later the government remarkably determined that the money saved the ban from un-sliced bread was negligible and the ban was rescinded.

Lunch once again became a simple pleasure to prepare.