Chief Quanah Parker was ambivalent about the whites, as he was half-Anglo himself.

His father was the warrior Peta Nocona, but his mother was Cynthia Ann Parker, who had been captured and adopted by the Comanches at age nine, after they massacred her family. She had been “rescued” by the Texas Rangers a few years back, but had tried to escape and return to her husband and children. Heartbroken over her separation, she had died …of influenza in 1871.

Quanah could see that buffalo hunting was becoming big business in the Texas Panhandle in the 1870’s. A group of merchants from Dodge City, Kansas moved south to establish a store near the ruins of the old Fort Adobe to cater to the influx of buffalo hunters. In April, 1874 a second store opened, and shortly afterwards, a saloon and a blacksmith shop. By the end of spring, 200 to 300 buffalo hunters were roaming the area, and trade at Adobe Walls was booming.

The Native Americans in the area were terrified by the threat that illegal hunting and the settlement posed to their existence. In the spring, they held a Sun Dance where Comanche medicine man, Isa-tai, foretold a victory to the warriors who would rid the Panhandle of the buffalo hunters. Early in the morning of June 27, 1874, Quanah Parker rallied 700 Comanche, Cheyenne, Kiowa, and Arapaho warriors, and attacked the buffalo camp.

The hunters took refuge in two stores and a saloon. The post held only 28 men (including Bat Masterson and Billy Dixon) but Isa-tai’s prophecy proved to be an illusion. Despite being dramatically outnumbered, the hunters’ high-powered rifles repelled the assault. After four days of battle, reinforcements arrived and the Indians were forced to retreat. As many as 70 Indians had been killed and many others, including Parker, were wounded.

The Battle of Adobe Walls was a crushing spiritual defeat for the Southern Plains tribes. Chief Quanah Parker understood that further resistance would lead to annihilation, and he counseled his people to lay down their arms and “take the white man’s road.”

He became a farmer. He also learned about peyote, after being gored by a bull and surviving with the help of a strong peyote tea given to him by a healer who showed him how to properly pray with peyote. He became an early, influential leader in the Native American Church. He was elected president of his local school board, and appointed a judge in the Court of Indian Offenses. He hunted wolves with Teddy Roosevelt, traveled numerous times to Washington D.C. to represent the Comanche, became a familiar figure in the halls of Congress, and rode his horse in TR’s inaugural parade. 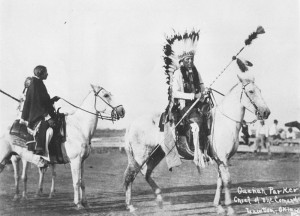