During the War of 1812, the British built a fort on Prospect Bluff along the Spanish side of the Apalachicola River in what is now northern Florida, and manned the garrison with a thousand Marines and several hundred African-American freedmen. After the end of the war, the British withdrew from the post and left the black population behind. 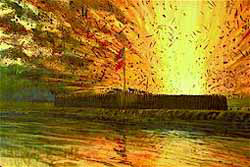 River. The Fort became known as the “Negro Fort” and it quickly became a “beacon of light to restless and rebellious slaves.” As might be expected, many in the U.S. Government took a dim view of this station on the “Underground Railroad.”

Following the construction of Fort Scott on the nearby Flint River, Andrew Jackson decided that to resupply the post, he needed to send the navy in via the Apalachicola, even though it was at that time Spanish territory. During one of these resupply missions, a party of sailors stopped along the river near the Negro Fort to fill their canteens with water, and they were attacked by men from the fort in what became known as the “Watering Party Massacre.”

Andrew Jackson promptly requested permission to dispatch gunboats to destroy the Negro Fort. Secretary of State John Quincy Adams produced a letter from a Georgia planter complaining about “brigand Negroes” who made “this neighborhood extremely dangerous to a population like ours.” Southern leaders worried that even a small, impoverished island of rebel slaves in the Caribbean or a parcel of Florida land occupied by a few hundred blacks could threaten the institution of slavery.

The Negro Fort was occupied at this time by about 330 people. At least 200 were freedmen, armed with ten cannons and dozens of muskets. They were accompanied by thirty or so Seminole and Choctaw warriors under a Choctaw chief. The remaining were women and children.

Jackson ordered Brigadier General Edmund P. Gaines to move against the fort. Before beginning an attack General Gaines first requested surrender; the leader of the fort, an African named Garson, refused, telling Gaines that he had orders from the British military to hold the post, and he raised the Union Jack.

On July 27, 1816 an American force and their Creek Indian allies launched their attack. The two sides exchanged cannon fire, but the black gunners had no experience with cannons, and were ineffective in their defense. Even so, the men of the fort refused to surrender, crying “Give me liberty, or give me death!”

The Americans, for their part, also fired their cannon for a while with little effect, until they loaded their cannon with a “hot shot” cannonball that had been heated until red hot. The “hot shot” sailed over the wall of the fort and directly into the open door of the powder magazine. A tremendous explosion was heard more than 100 miles away in Pensacola as the entire “Negro Fort” was blown to bits in the blink of an eye.

The fort’s commander, Garson, and the Choctaw chief, were among the few who survived. They were handed over to the Creeks, who shot Garson and scalped the chief. The few remaining survivors were carried upstream to Fort Scott and notices posted so their former “owners” could come to that post and claim them.

The site of the Fort at Prospect Bluff (or Negro Fort) is preserved today at Fort Gadsden Historic Site in Florida’s Apalachicola National Forest.