Ebenezer Emmons was a doctor from the Berkshires with a particular interest in geology. After graduating from Williams College and the Albany College of Medicine, he studied geology at the Rensselaer School in Troy. He was fascinated with Paleozoic stratigraphy, and was the first discoverer of primordial fauna in any country.…

Orson Phelps was not a great guide. His neighbors considered him lazy and shiftless. He delighted in bushwacking up a 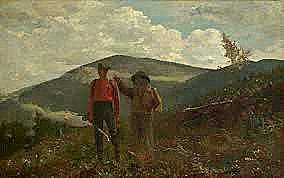 trail, but didn’t care much about preparing camp…

Dr. Emmons was leading the Geological Survey of New York State, looking for the headwaters of the Hudson River in the high country of northern New York. The survey party found the river’s source at “Lake Tear of the Clouds” on the southwest slope of the highest mountain (5,343 feet) of the range. Continuing to the summit, Dr. Emmons named the mountain “Mount Marcy” after New York’s Governor, William L. Marcy.

Orson Phelps always called it “Mt. Mercy”. He turned climbing mountains into a remunerative specialty by carefully cultivated his image. He wore a woolen shirt, patched up butternut trousers, and a limp, light-brown felt hat, frayed away at the top so that his tangled yellow hair grew out of it like a fern. “Soap is a thing,” he said, “that I hain’t no kinder use for.”

Emmons named the mountains the “Adirondacks”, from the Mohawk “ratirontaks”, meaning “they eat trees”, which is how the Mohawk referred to their Algonquian neighbors who would eat buds and bark off trees when food was scarce.

Emmons survey of New York State became the standard for stratigraphic surveys of the United States. He published the Manual of Mineralogy and Geology (1826), Report on the Second Geological District of New York (1842), Natural History of New York (1848), and Textbook of Geology (1860). He became embroiled in a nasty dispute with his student James Hall (the chief invertebrate paleontologist of his era) who claimed the rocks east of the Hudson River were younger, whereas Emmons claimed them to be older. The dispute went to court – suit led to counter suit. Ultimately a court decision favoring Hall forced Emmons to leave New York. (Geologists today side with Emmons).

Phelps stayed on the mountain. In 1849 he blazed the first trail to its summit from the east, going in from Lower Ausable Lake and then passing Haystack and the head of Panther Gorge. Later he cut the Bartlett Mountain trail. About 1850 he guided the first two ladies to make the complete ascent, to the summit of Marcy. He took care of the fancy summer people – to a point – he balked when offered lobster after soup and salad at the St. Huberts Inn, saying, “I drank yer dishwater an’ I ate yer grass, but I’ll be derned if I’ll eat yer bug!”

Dr. Emmons saw the work of geologic history in the mountains; Old Mountain Phelps saw God in every sunrise and in every sunset. Where Dr. Emmons listened to a clear mountain stream and heard the force of erosion at work, Phelps heard a symphony.

Dr. Emmons passed away in 1866 in his exile in North Carolina. His remains were returned to Albany, where he was laid to rest next to his old rival, the invertebrate paleontologist of his era, James Hall.

Old Mountain Phelps lived to the age of eighty-eight in Keene Valley. He went to his eternal rest in 1905, and to the end expressed the hope and expectation that his next sight would be more beautiful sunrises and sunsets among other ranges of mountains which he would learn to love as much as he loved his own Adirondacks.