August 10, 1846: The Smithsonian Institute is created

James Smithson was interested in almost everything: the venom of snakes, the chemistry of volcanoes, the constituents of a lady’s tear, the fundamental nature of electricity… He published papers on an improved method of making coffee, an analysis of the mineral calamine, substances used in traditional Indian medicines . . . 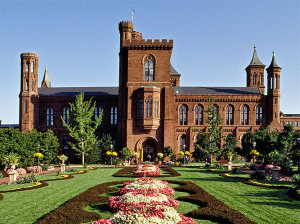 He was the illegitimate son of the first Duke of Northumberland and a wealthy widow who was a cousin of the Duchess. His exact birthday remains unknown because he was born in secret in Paris, where his mother had gone to hide her pregnancy.

Smithson never married; he had no children. He traveled widely in Europe, was in Paris during the French Revolution, and was later imprisoned during the Napoleonic Wars. Friends with many of the great scientific minds of his age, he believed that the scientific pursuit of knowledge was the key to prosperity for all of society: “It is in his knowledge that man has found his greatness and his happiness. . . . No ignorance is probably without loss to him.”

Smithson died in 1829, at approximately 64 years old while living in Genoa, Italy. His considerable wealth was left to his nephew Henry James Hungerford. However, in a curious codicil, the will indicated that if Hungerford should die leaving no heirs—legitimate or illegitimate— the money was to go to the people of the United States of America, a place Smithson had never visited, to create something to be called “the Smithsonian Institution” for the “increase and diffusion of knowledge” among men.

The will was so extraordinary that it was printed in the Times of London, and the potential windfall for the United States caught the eye of an American editor who reprinted it in The New York American. However, it was unlikely that anything would come of the potential bequest.  Smithson’s nephew and heir was only in his early 20s, and seemed quite adept at spending down his inheritance.

The executor of the estate contacted the American Chargé d’Affaires in London and set in motion the transfer of the estate, and President Andrew Jackson soon announced the bequest to Congress. In September 1838, Smithson’s legacy, which amounted to more than 100,000 gold sovereigns, was delivered to the mint at Philadelphia. Recoined in U.S. currency, the gift amounted to more than $500,000.

For the next eight years, Congress debated what to do with the estate. Finally President James K. Polk signed the legislation Aug. 10, 1846, that established the Smithsonian Institution.

Since its founding the Smithsonian has grown to become the world’s largest museum and research complex, comprised of 19 museums, the National Zoo and nine research facilities.