Alcatraz was created as a “super prison” for kidnapers, racketeers, and predatory criminals such as Al Capone and “Machine-Gun” Kelly. “The Rock” in the middle of San Francisco Bay was considered escape proof – but convicts kept attempting to flee:

April 27, 1936 — While working at the trash incinerator, Joe Bowers began climbing the chain link fence at the island’s 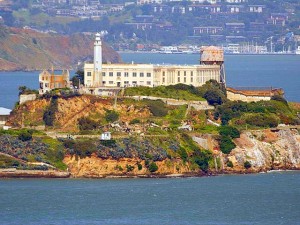 edge. Refusing orders to stop, he was shot by an officer from the guard tower. Bowers fell 100 feet to the shore below, dead.

December 16, 1937 — Theodore Cole and Ralph Roe filed through the flat iron bars on a window in the model industries building. They disappeared into the waters of San Francisco Bay during a storm when the Bay’s currents were especially fast and strong, and were swept out to sea.

May 23, 1938 — James Limerick, Jimmy Lucas, and Rufus Franklin attacked correctional officer Royal Cline in the woodworking shop and killed him with a hammer. They then climbed to the roof, where a guard in the tower shot them. Limerick died; Lucas and Franklin received life sentences.

May 21, 1941 — Joe Cretzer, Sam Shockley, Arnold Kyle, and Lloyd Barkdoll took several guards hostage while in the industries area. The officers managed to convince the four that they could not escape and they surrendered.

September 15, 1941 — While on garbage detail, John Bayless attempted to flee. He gave up shortly after entering the cold water of San Francisco Bay.

April 14, 1943 — James Boarman, Harold Brest, Floyd Hamilton, and Fred Hunter took two officers hostage. They climbed out a window and made their way to the water. Guards fired shots as they started swimming away. Boarman sank below the water; Hunter and Brest were apprehended; Hamilton hid out for two days in a small cave before he was discovered.

August 7, 1943 — Huron “Ted” Walters disappeared from the laundry building. He was caught at the shoreline.

July 31, 1945 — John Giles worked unloading army laundry sent to the island to be cleaned. Over time, he stole an entire army uniform. Dressed in uniform, Giles calmly walked aboard an army launch. When it arrived at Angel Island Giles was met by correctional officers who returned him to “the Rock”.

May 2, 1946 — Bernard Coy, Joe Cretzer, Marvin Hubbard, Sam Shockley, Miran Thompson, and Clarence Carnes overpowered officers, seized guns and keys, and took control of the cellhouse. Unable to unlock the yard door, the six decided to fight. Two hostages were shot point-blank, 18 officers were injured, and the Marines were called in. Coy, Cretzer, and Hubbard wound up dead. Shockley and Thompson received the death penalty and were executed in the gas chamber at San Quentin.

July 23, 1956 — Floyd Wilson disappeared from his job at the dock. After hiding for several hours among large rocks along the shore, he was discovered.

September 29, 1958 — While working on the garbage detail, Aaron Burgett and Clyde Johnson overpowered a guard and attempted to swim from the island. Johnson was caught in the water; Burgett’s body was found floating in the Bay two weeks later.

June 11, 1962 — Frank Morris and John and Clarence Anglin drilled through vent holes, climbed to the top of the cellblock and escaped to the roof. They then climbed down a drainpipe and made their way to the water. A water search found two crude life vests and a raft fabricated out of prison-issue raincoats, but no sign of the men. Several weeks later, a badly deteriorated body washed up a short distance up the coast from San Francisco.

December 16, 1962 — John Paul Scott and Darl Parker bent bars in the cellhouse basement, climbed out, and plunged into the water. Parker was discovered on a small outcropping of rock a short distance offshore; Scott was found on the rocks beneath the Golden Gate Bridge suffering from shock and hypothermia. Both were returned to Alcatraz.