One evening early in August 1958, Nat Hentoff rushed into the Hickory House jazz club in Midtown Manhattan and told Marian McPartland  “You’ve got this date to have this picture taken at 10 o’clock.” 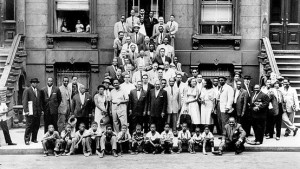 Marian didn’t particularly want to get up that early the next morning, but she did. So did a lot of other cool cats. On Aug. 12, 1958, at the ungodly hour of 10 a.m, fifty-seven of the hippest jazz musicians of the be-bop era gathered on East 126th Street to have their picture taken for Esquire magazine.

As the neighborhood gathered and gawked, the hipsters met and joked with friends, family, scatted about, and even blew a few jazz riffs. Freelance photographer Art Kane bunched them together in front of the steps of two brownstones. Some neighborhood kids plunked down on the curb alongside pianist-bandleader Count Basie who had grown tired of standing, waiting for the shoot to begin.

At the sight of this august gathering, even the angel Gabriel must have been blowing his trumpet in heaven.