It was headline news in the New York Times.

Max Eastman was sitting with his editor Max Perkins in the Scribner’s Fifth Avenue publishing offices one summer day, when Ernest Hemingway barged in. 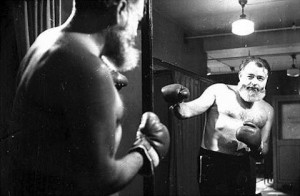 Eastman had recently written an essay (“Bull in the Afternoon”) which challenged Papa Hemingway’s macho posturing, “Come out from behind that false hair on your chest, Ernest. We all know you.”

The volume containing the essay happened to be lying on Perkins’s crowded desk just then, “and when I saw that,” says Mr. Hemingway, “I began to get sore.” Using a few “Death in the Afternoon” phrases, Hemingway made some kidding remarks about the essay, and then he bared his chest to Mr. Eastman and asked him to look at the hair and say whether it was false.

He then pulled opened Eastman’s shirt to reveal the older man’s considerably less hairy one. Perkins, trying to keep things light, then exposed his own.

Then, Hemingway to Eastman: “Look here, what did you say I was sexually impotent for?”

“We were just fooling around, in a way,” Mr. Hemingway said yesterday. “But when I looked at him and I thought about the book, I got sore. I tried to get him to read to me, in person, some of the stuff he had written about me. He wouldn’t do it. So that’s when I socked him with the book.”

“He was standing over there,” pointing to a window with a window seat in Mr. Perkins’s office. “I didn’t really sock him. If I had I might have knocked him through that window and out into Fifth Avenue. That would be fine, wouldn’t it? That would have got me in wrong with my boss, and he might have had me arrested. So, though I was sore, I just slapped him. That knocked him down. He fell back there on the window seat.”

“But how about throwing you over the desk?” Mr. Hemingway was asked, “and standing you on your head in a corner?”

“He didn’t throw anybody anywhere. He jumped at me like a woman–clawing, you know, with his open hands. I just held him off. I didn’t want to hurt him. He’s ten years older than I am.”

“How about books and papers being knocked off the desk?” Mr. Hemingway was asked. “Mr. Eastman says–”

“Sure, some books were knocked off. He jumped at me. I held him off, there was a little, a little wrestle.”

“The man didn’t have a bit of fight. He just croaked, you know, at Max Perkins. ‘Who’s calling on you? Ernest or me?’ So I got out. But he didn’t do any throwing around. He just sat and took it.

I felt sorry for him. Max Perkins told me, he said ‘no one has any right to humiliate a man the way you have.’ And I guess he’s right. I feel kind of sorry, but he shouldn’t go around telling these lies.”

Mr. Hemingway had a large swelling over his left eye, high up on his forehead. Asked if this was a result of the battle of Thursday he grinned and shook his head.

He pulled off his coat and showed a deep scar in the biceps of his right arm.

“Max Eastman didn’t do that to me, either,” he said. He showed another scar. “Or that.”

Mr. Hemingway is sailing for Spain today. It is understood that Mr. Eastman left yesterday to spend a week-end at Marthas Vineyard.

Mr. Perkins and other members of the Scribner staff refused to do more than verify the fact that the affair had taken place, taking the stand that “this is a personal matter between the two gentlemen in question.”