On August 17, 1806 as Lewis and Clark prepared to return to St. Louis, they “settled up” with Toussaint Charbonneau, the independent trader who had signed on as an interpreter, not so much because of his abilities, but because his wife Sacagawea could speak Shoshone as well as Hidatsa, as well as a little French. 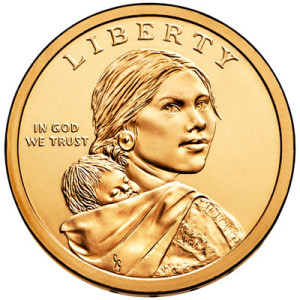 Charbonneau received approximately $500 for his horse, his tepee, and his services; Sacagawea received nothing.

Clark noted in a letter to Charbonneau: “Your woman who accompanied you that long dangerous and fatiguing rout to the Pacific Ocean and back disserved a greater reward for her attention and services on that route than we had in our power to offer her.”

She was a teenage Indian girl, a member of the Shoshone tribe who had been taken prisoner by members of the Hidatsa, and then traded to the 40 year old French Charbonneau, had won Sacagawea in a wager.

She soon found herself pregnant and accompanying a band of white men on an 8,000-mile expedition for 28 months into some of America’s most treacherous territories. Fortunately for the explorers, Sacagawea could read the rivers and the valleys. She had a sense of what the landscapes said about direction, where they were, and where they were going. She also had a sense of what could be eaten along the way, and she knew how to find food.

Her interpreting skills proved invaluable when she negotiated with the Shoshone for horses. Without those horses, who knows what would have happened to the expedition…

The last recorded glimpses of Sacagawea came in 1811 from a traveler who described a young Indian woman, in her early twenties, wearing the cast off clothing of white women, drifting through St. Louis, seemingly alone, having given up her children to the care of William Clark.

It appears that she died the following year.