August 25, 1814: Tornados drive the British out of Washington

On August 24th, the invading British had burned the White House, the War Department, the State Department, the Treasury and the Capitol building. The fires burning down the public buildings threatened to spread out of control to the rickety boarding houses which lined the muddy avenues of the half built city. 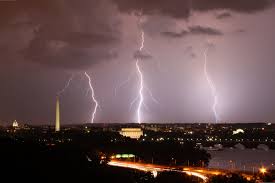 The following day, August 25, the fires still raged. But then thick clouds blew in from the west, and, with cracks of thunder and great flashes of lightning and great gusts of wind, a massive storm crashed into the District.

The storm tore roofs off buildings, lifted them right off their foundations. The winds uprooted trees and knocked men to the ground. Houses collapsed, killing British soldiers taking shelter inside. One British officer reported seeing cannons lifted off the ground and thrown through the air.

Redcoats lay prostrate in the mud of the streets of Washington, terrified by the flying debris, fearful that even they would be blown away by the whirlwind.

As the storm began to subside, a British officer emerged from his shelter and asked a local inhabitant, “Great God, Madam, is this the kind of storm to which you are accustomed in this infernal country?!”

She responded, “No, sir, this is a special interposition of Providence to drive our enemies from the city.”

The fires were largely extinguished by the rains. The British retreated to their ships.