In fall of 1965, while 35,000 men a month were being called to serve in what would become America’s longest and most divisive war, federal officials became concerned by a noticeable increase in the number of marriages among 19-year-olds, some of which are apparently made to escape the draft. Other than attending college, getting married was one of the few deferments available to avoid the draft and the Vietnam War. 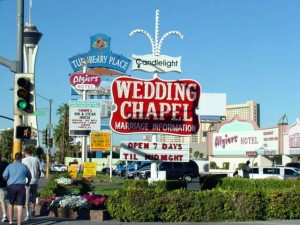 On August 26, 1965, President Lyndon Johnson announced that an order would eliminate special status for men married after midnight of that day:
Executive Order 11241:  This order will formally eliminate deferments for childless men who are married after August 26, 1965, between the ages of 19-26, and will be considered the same as single men in Class I-A with regard to the order of call. Students are exempt …

That evening young couples headed to Las Vegas by the droves, from San Diego, Newark, Chicago, Kansas City, New Haven, Seattle, Denver, St. Paul, Dallas. They had until midnight (PST) to get hitched, and only in Nevada there was no waiting period for licenses, no blood tests, and a marriage license cost just $10.

That evening young couples from across the country lined up on the third floor of the county courthouse at 200 Third Street off Carson Avenue, in Las Vvegas, ready to tie the knot.

“I came back to the office from performing a ceremony at the Dunes at around 9:30 p.m., and it was packed,” said Judge James Brennan, who was one of the Justices of the Peace on call that night. “I knew they had a mission to get married before midnight.”

There were at least 50 couples waiting outside the courthouse. It was a mass of people, and everything was rushed. There was a huge line and a sign on the lawn that read ‘standing room only!’

Justice Brennan finished up around 2 in the morning, and then left the office and enjoyed a beer at the back bar of the Horseshoe Casino.