The day Lyndon Baines Johnson came into the world in a small farmhouse on the Pedernales River near at Stonewall, Texas, he made quite an impression. His grandfather declared he would grow up to be a United States Senator. 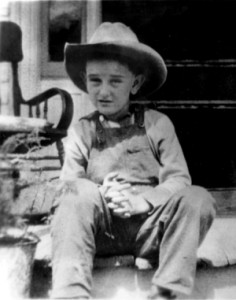 At the age of four, Lyndon Johnson began running to the nearby one-room “Junction School” to play with his cousins at recess. The teacher took him on as a pupil, and he would sit in her lap and recite his lessons.

The family moved to nearby Johnson City, named for Lyndon’s forebears, and the young Lyndon entered first grade. He graduated from Johnson City High School at the age of fifteen, and made his way to California with a few friends, where he performed odd jobs, including one as an elevator operator. A year later he returned home where he worked on a road construction gang.

Borrowing $75, he enrolled in Southwest Texas State Teachers College at San Marcos. He earned money as a janitor and as an office helper.

He dropped out of school to serve as principal and teach at Welhausen School, a Mexican-American school in the south Texas town of Cotulla, but he still had time to edit the College paper and star on the debate team.

He graduated, taught for a few weeks at Pearsall High School, and then took a job teaching public speaking at Sam Houston High School in Houston, Texas. His debate team won the district championship.

In November 1931, Congressman Richard Kleberg asked Johnson to come to Washington to work as his secretary. Johnson held the job for three years and learned how the Congress worked. In 1933, he was elected speaker of the “Little Congress,” an organization of congressional workers.

In the fall, he briefly attended Georgetown University Law School in Washington, D. C. On a trip home to Texas, Johnson met Claudia Alta Taylor. He decided almost immediately that she should be his wife.

Two months later, Lady Bird agreed, and on November 17, 1934, they were married in San Antonio.

In February 1937, Lyndon Johnson returned home to seek the advice of his father. Should he run for Congress?

A month later Lyndon Johnson stood on the porch of his boyhood home to announce his candidacy for the U.S. House of Representatives for the Tenth District of the State of Texas.

Lyndon Baines Johnson became as big and as brash as the entire state of Texas, but he never forgot the small farmhouse or the people of his childhood from the Pedernales River Valley