In the first half of the nineteenth century, the passenger pigeon, Ectopistes migratorius, was the most abundant bird in North America.

John James Audubon witnessed immense flocks of them over Ohio in 1813: 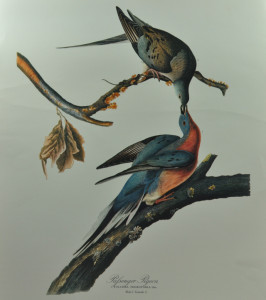 “In passing over the Barrens a few miles beyond Hardensburgh, I observed the pigeons flying from north-east to south-west, in greater numbers than I thought I had ever seen them before, and feeling an inclination to count the flocks that might pass within the reach of my eye in one hour, I dismounted, seated myself on an eminence, and began to mark with my pencil, making a dot for every flock that passed.

In a short time finding the task which I had undertaken impracticable, as the birds poured in in countless multitudes, I rose, and counting the dots then put down, found that 163 had been made in twenty-one minutes. I travelled on, and still met more the farther I proceeded. The air was literally filled with Pigeons; the light of noon-day was obscured as by an eclipse; the dung fell in spots, not unlike melting flakes of snow; and the continued buzz of wings had a tendency to lull my senses to repose…

Before sunset I reached Louisville, distant from Hardensburgh fifty-five miles. The Pigeons were still passing in undiminished numbers, and continued to do so for three days in succession. The people were all in arms. The banks of the Ohio were crowded with men and boys, incessantly shooting at the pilgrims, which there flew lower as they passed the river. Multitudes were thus destroyed. For a week or more, the population fed on no other flesh than that of Pigeons, and talked of nothing but Pigeons…”

By 1871 the pigeon’s nesting areas still covered 850 square miles of Wisconsin’s sandy oak barrens; the breeding population was still estimated at 136 million adult birds. The flocks were still so thick that one could kill low-flying birds by just waving a pole in the air.

Pigeon meat was tasty and the pigeon-hunting industry was thriving. “Hardly a train arrives that does not bring hunters or trappers,” reported the Kilbourn City Mirror. “Hotels are full, coopers are busy making barrels, and men, women, and children are active in packing the birds or filling the barrels. They are shipped to all places on the railroad, and to Milwaukee, Chicago, St. Louis, Cincinnati, Philadelphia, New York, and Boston.”

It seemed highly impossible that the pigeon population could ever be threatened.

But the highly gregarious Passenger Pigeons could only initiate courtship and reproduce when gathered in great numbers. When the flocks fell below the courting threshold, the populations crashed.

By the mid-1890s, wild flock sizes had plummeted from hundreds of millions to mere dozens.

Then they disappeared altogether, except for three captive breeding flocks which hung on in zoos in the Midwest.

Professor Charles Otis Whitman kept about a dozen pigeons at the University of Chicago but by 1903 they had stopped breeding. By 1906 he was down to five birds.

He sent a female named Martha (after Martha Washington) to the Cincinnati Zoo in 1902 to live with two males. One of the males died in 1909, the second in 1910. Only Martha lived on.

On September 1, 1914, Martha, the last known Passenger Pigeon, died in the Cincinnati Zoo. She was thought to be twenty-nine years old.

Her body was frozen into a block of ice and sent to the Smithsonian Institution where she was skinned, dissected, photographed and mounted.