Today the guns are silent. A great tragedy has ended. A great victory has been won….

As I look back upon the long, tortuous trail from those grim days of Bataan and Corregidor, when an entire world

lived in fear, when democracy was on the defensive everywhere, when modern civilization trembled in the balance, I 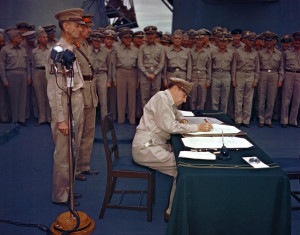 thank a merciful God that he has given us the faith, the courage and the power from which to mold victory. We have known the bitterness of defeat and the exultation of triumph, and from both we have learned there can be no turning back. We must go forward to preserve in peace what we won in war.

A new era is upon us. Even the lesson of victory itself brings with it profound concern, both for our future security and the survival of civilization. The destructiveness of the war potential, through progressive advances in scientific discovery, has in fact now reached a point which revises the traditional concepts of war.
Men since the beginning of time have sought peace…. Military alliances, balances of power, leagues of nations, all in turn failed, leaving the only path to be by way of the crucible of war.

We have had our last chance. If we do not now devise some greater and more equitable system, Armageddon will be at our door. The problem basically is theological and involves a spiritual recrudescence and improvement of human character that will synchronize with our almost matchless advances in science, art, literature and all material and cultural development of the past two thousand years.

It must be of the spirit if we are to save the flesh.