Captain Henry Hudson and his crew of twenty Dutch and English sailors on board the ship Half Moon had explored bays and inlets from Maine to Cape Cod to the Chesapeake looking for the elusive Northwest Passage, when they arrived inside Sandy Hook on September 3. The men explored the bay for about a week, and then on September 11, 1609 Hudson came upon “as fine a river as can be found.” 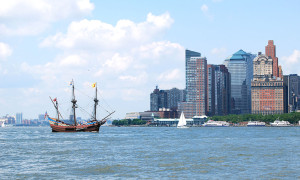 It was a sunny hot day. At one in the afternoon, the Half Moon set up the river, favored by the tide and a breeze from the south-south-west. The harbor was well protected, and when the local people came out to the boat, they were friendly and gave the sailors tobacco and Indian wheat.

The next day, twenty-eight canoes came out to the boat, full of men, women and children. The sailors didn’t trust the crowd and wouldn’t let them on board, but they were happy to buy oysters and beans, and they admired the natives’ copper tobacco pipes and earthen pottery.

In the following days the Half Moon sailed up the mile-wide river, and the explorers found it abundant with oysters and salmon. There was high land on both sides, and mountains off to the west, and they traded Indian corn and pompions and tobacco, and beaver and otter skins, and feasted on venison with the natives. One day the master and his mate set ashore and shared their wine and aqua-vita with the locals and all were very merry, especially the natives who had never tasted strong spirits before.

On subsequent days they went ashore and gathered chestnuts, and found good ground for growing corn and other garden herbs, and goodly walnuts and oaks, chestnuts and yews, and slate and good stones for building. The natives were welcoming and eager to trade for trinkets. The mountains looked as if they had metal or minerals in them, and the natives showed them a stone that looked like emery which could cut metal or glass.

The crew sailed upriver nearly as far as Albany before realizing this was not the passage to the Indies which they sought, but returning to the river’s mouth they realized that they had discovered a fur-trader’s paradise populated by natives with whom one could do business, and an outstanding harbor and tidal river with lands on either side which were ‘the finest for cultivation that I ever in my life set foot upon,’

As Robert Juet, the ship’s master, noted in his journal, “This is a very pleasant place to build a town on.”