Dolley Payne was born in 1768 to a Quaker family in North Carolina, and moved to a plantation in Virginia as a small child. After her father emancipated his slaves in 1783 he brought the family to Philadelphia, where Dolley discovered a cosmopolitan life markedly different from her early years. 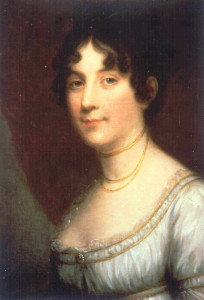 She married lawyer and fellow Quaker John Todd Jr. in 1790 and gave birth to sons Payne in 1792 and William in 1793. Disaster struck when a yellow fever epidemic swept through Philadelphia in August of 1793 and both her husband and her son William fell ill. They both died on October 24th that year.

Life was difficult for the young widow until a Virginia representative to Congress, which was in session in Philadelphia at the time, came to notice the attractive young widow who lived near his boardinghouse.

James Madison was a diminutive, shy man known more for his intellect than his charm. He asked his old college friend Aaron Burr, who was known to be a great lady’s man, to arrange an introduction.

Dolley was a tall, black-haired, blue-eyed twenty-six year old Quaker beauty. James Madison was seventeen years older than Dolley and one of the most brilliant minds in the United States. He was also short, slightly built, easy to overlook, Episcopalian, and painfully shy.

The Quakers promptly cast Dolley out of meeting for marrying outside the sect. Dolley discarded her plain clothing and began wearing the fashionable outfits (even turbans!) that became an indelible part of her public image.

When Madison was appointed Secretary of State in 1801, Dolley began to host receptions for the widower President Thomas Jefferson.

When her husband ran for President in 1808, her presence by his side was enough for his opponent Charles Pinckney to grumble, “I was beaten by Mr. and Mrs. Madison. I might have had a better chance had I faced Mr. Madison alone.”

One of Dolley’s first acts as First Lady was to invite some Senators and Congressmen to visit the President’s House to see how poorly furnished it was (when Jefferson returned to his Monticello, he took all his furniture with him). Money was quickly appropriated and Dolley planned a parlor to receive callers and an Oval room (the Blue Room) for formal receptions and for the “Squeezes” or informal open houses for which she was famous.

Dolley entertained graciously. She often entered a reception room with her parrot on her shoulder and carrying a book (usually by James Fenimore Cooper or Washington Irving) as a means to break the ice with guests. She established the White House as Washington’s social center, and with good reason President Zachary Taylor referred to Dolley Madison as “the first lady of the land”, thereby coining the term “First Lady”.

At an 1838 New Year’s Party hosted by Dolley in Washington, Henry Clay famously stated, “Every body loves Mrs. Madison.” To this, Dolley replied, “Mr. Clay, I love every body.”