A warm, damp, mistling day without much wind. The white pines in Hubbard’s Grove have now a pretty distinct parti-colored look, – green and yellow mottled, – reminding me of some plants like the milkweed, expanding with maturity and pushing off their downy seeds. They have a singularly soft look. For a week or ten days I have ceased to look 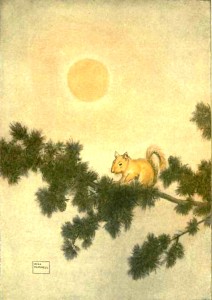 for new flowers or carry my botany in my pocket. The fall dandelion is now very fresh and abundant in its prime.

I see where the squirrels have carried off the ears of corn more than twenty rods from the corn-field into the woods. A little further on, beyond Hubbard’s Brook, I saw a gray squirrel with an ear of yellow corn a foot long sitting on the fence, fifteen rods from the field. He dropped the corn, but continued to sit on the rail, where I could hardly see him, it being of the same color with himself, which I have no doubt he was well aware of. He next took to a red maple, where his policy was to conceal himself behind the stem, hanging perfectly still there till I passed, his fur being exactly the color of the bark. When I struck the tree and tried to frighten him, he knew better than to run to the next tree, there being no continuous row by which he might escape; but he merely fled higher up and put so many leaves between us that it was difficult to discover him. When I threw up a stick to frighten him, he disappeared entirely, though I kept the best watch I could, and stood close to the foot of the tree. They are wonderfully cunning.