Soviet Premier Nikita S. Khrushchev had been touring the United States for a week, and was more than a little miffed from his reception in Los Angeles. 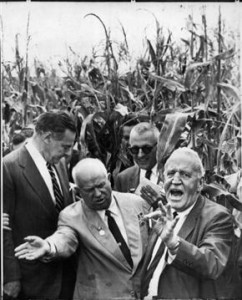 He had just left Tinseltown in a huff: “And I say, I would very much like to go and see Disneyland. But then, ‘we cannot guarantee your security’ they say. Then what must I do? Commit suicide? What is it? Is there an epidemic of cholera there or something? Or have gangsters taken hold of the place that can destroy me?” Khrushchev left Los Angeles the next morning.

He found Coon Rapids, Iowa, much more to his liking.

After mixing it up with Shirley MacLaine and Frank Sinatra he was happy to let down in the heartland with his old friend, seed corn salesman Roswell Garst.

“The father of a friend of mine said that everyone I saw around Coon Rapids wearing a tie who I didn’t know was a spy,” says Liz who was eight years old at the time. “I spent a lot of time checking out the cool spies on Main Street.”

Khrushchev knew that his country needed a corn belt and set about learning more about American agriculture. In an exchange of experts between the U.S. and the Soviet Union Roswell Garst ended up representing his farm and seed company in Coon Rapids, and was asked to visit the Soviet Union. During the trip, he and Khrushchev met and hit it off.

“My grandfather thought he could do anything he wanted,” Liz Garst, Roswell’s granddaughter, said. “He was the sort of guy who would write the Pope letters or get on the train to yell at the secretary of agriculture. He thought that what he said could influence things.”

Khrushchev relished Garst’s cantankerousness, especially when it justified his own. He loved it when Garst bawled out Soviet farmers for sowing corn without fertilizing the soil.

Some Americans criticized Garst for trading with the enemy, and some claimed he was a Communist, but Liz said her grandfather was simply a good capitalist who was doing what was right for business.