September 18, 1793: George Washington Lays the Cornerstone of the Capitol

George Washington envisioned a majestic neoclassical domed structure, a building of “grandeur, simplicity, and beauty” as a seat for the legislature of the young Republic, which he believed would someday come to rival the noble Capitol of ancient Rome. 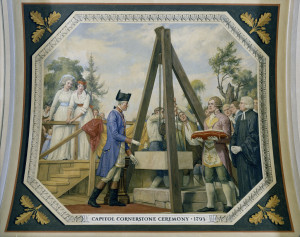 By mid-September of 1793 construction was commencing to create the city being laid out in the new District of Columbia along the Potomac River. On Wednesday, September 18, 1793, President Washington crossed the Potomac from his plantation at Mount Vernon, and was escorted by members of Masonic lodges from nearby Maryland and Virginia to the site of the new President’s House which was already taking shape on the muddy road which would be become Pennsylvania Avenue.

There they were joined by the members of the new Federal Lodge No. 15, which had just received its charter six days before, including the Lodge’s Master, James Hoban, the architect of the President’s House.

The assembled Masons marched “in the greatest solemn dignity, with music playing, drums beating, colors flying and spectators rejoicing,” up the mud road to the little hilltop know until then as Jenkins Hill. A trench had been dug for the foundation, and the group assembled around what would become the southeast corner of the North Wing of the Capitol where Grand Marshal Clotworthy Stephenson presented a silver plate to the commissioners.

It read:
“This South East corner Stone, of the Capitol of the United States of America in the City of Washington, was laid on the 18th day of September 1793, in the thirteenth year of American Independence, in the first year of the second term of the Presidency of George Washington, whose virtues in the civil administration of his country have been as conspicuous and beneficial, as his Military valor and prudence have been useful in establishing her liberties, and in the year of Masonry 5793, by the Grand Lodge of Maryland, several Lodges under its jurisdiction, and Lodge No. 22, from Alexandria, Virginia.”

After the reading of the inscription, the cornerstone was made ready. A silver trowel and marble gavel had been crafted especially for the occasion by a Masonic silversmith in Alexandria. President Washington and four Master Masons took the plate and stepped down into the trench.

They spread a small amount of cement on the stone with the silver trowel, took turns tapping the stone into place with the gavel.

A square was applied as a symbol of virtue, to make certain that each angle of the stone was perfectly cut.

Next, the level, a symbol of equality, was used it to make sure that the stone was horizontally correct.

Last, the plumb, an emblem of morality and rectitude, showed that the stone was perfectly upright.

The stone was solemnly declared square, level and plumb and suitable as the foundation for the new building.

President Washington then placed the silver plate on the cornerstone and sprinkled kernels of wheat over the stone from a golden cup as a symbol of goodness, plenty and nourishment.

He then poured wine from a silver cup over it as a symbol of friendship, health and refreshment.

Finally, he drizzled drops of oil down its sides – like the sacred oil that ran down Aaron’s beard in the Old Testament – a symbol of joy, peace and tranquility.