John F. Kennedy had just been promoted to the rank of lieutenant (junior grade) and ordered to report for duty as commanding officer of a motor torpedo boat in Panama. 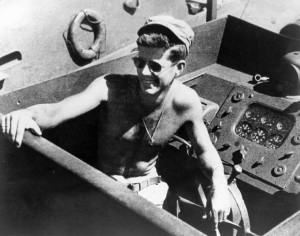 Prior to his departure, playwright Clare Boothe Luce, a close friend of the Kennedy family, sent the young naval officer a good luck coin that once belonged to her mother.

Kennedy wrote to Luce thanking her for the gift:

“I came home yesterday and Dad gave me your letter with the gold coin. The coin is now fastened to my identification tag and will be there, I hope, for the duration. I couldn’t have been more pleased. Good luck is a commodity in rather large demand these days and I feel you have given me a particularly potent bit of it.

The fact that it once belonged to your mother – and then to you – and you were good enough and thoughtful enough to pass it along to me – has made me especially happy to have it.

Just before coming home, I was considering getting a St. Christopher’s medal to wear. Now, however, for me, St. Christophers are out – I’ll string along with my St. Claire.

The following April, Kennedy’s PT boat was rammed and cut in two by a Japanese destroyer near the Solomon Islands. A few months later, Kennedy again wrote to Luce. He enclosed a letter opener he had fashioned “from a Jap 51 cal. bullet and the steel from a fitting on my boat, part of which drifted onto an island” and he thanked her again:

“With it goes my sincere thanks for your good-luck piece, which did service above and beyond its routine duties during a rather busy period.”