John Adams didn’t think much of York: “The People are chiefly Germans, who have Schools in their own Language, as well as Prayers, Psalms, and Sermons so that Multitudes are born, grow up and die here, without learning the English…” but at least the Susquehanna River stood between the Second Continental Congress and the British. 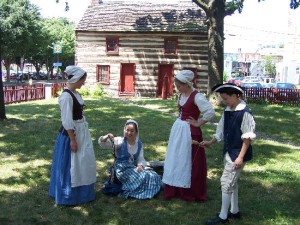 The mud-splattered delegates to the Continental had straggled into town after the redcoats pushed them and the Continental Army out of Philadelphia. They had met for one day at Lancaster, but moved across the river to York so the Susquehanna could stand between them and the enemy.

They had dodged the British before when they moved from Philadelphia to Baltimore; they had returned briefly to the State House in Philadelphia, before retreating up the Susquehanna. They met one day in Lancaster’s court house. And now John Hancock, Samuel Adams, Roger Sherman, John Witherspoon, Robert Morris, Richard Henry Lee and Francis Lightfoot Lee found themselves in York.

These were troubling times, but soon a messenger arrived telling of a patriot victory against British General Burgoyne in the Battle of Saratoga. In response, Congress declares a national day of prayer and thanksgiving.

By November the Congress at York passed the Articles of Confederation, and for the first time named the colonies “The United States of America.”

In February the Congress signed a treaty of Alliance with the French, and the prospects for the young country were much improved.

Finally Congress received word that the British army had evacuated Philadelphia on June 18, 1778.

On June 24 it resolved that Congress adjourn June 27, “from this place to meet at Philadelphia, on Thursday, the 2 day of July next.”
When the members of Congress returned to Philadelphia, they found that the British had left the State House and many other buildings in a disgraceful condition. As Josiah Bartlett, a delegate from New Hampshire, noted: “…the State House was left by the enemy in a most filthy and sordid situation, as were many of the public and private Buildings in the City. Some of the genteel Houses were used for Stables and Holes cut in the Parlor floors & their dung shoveled into the Cellars.”

The Continental Congress would move again, to Princeton, Annapolis, Trenton, New York City, and back to  Philadelphia before settling for good in  Washington, DC