It wasn’t just Chicago that went up in flames. 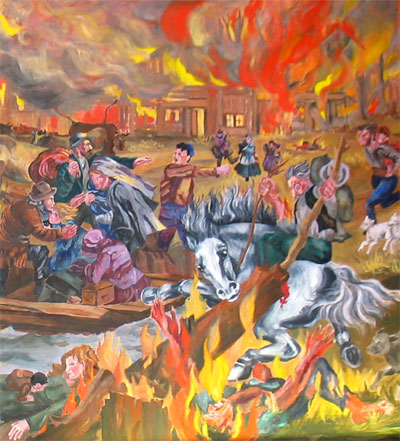 The booming lumber industry hadn’t always bothered to burn away the brush they cleared. Sparks from passing trains could ignite small fires, and with the long drought, small wildfires had become just another part of life in the region.

When a massive cold front hit on October 8th, strong winds fanned the flames across Wisconsin and Northern Illinois and across Michigan and suddenly connected all the little wildfires into an immense firestorm, large enough to sustain its own wind system and even generate tornadoes.

The fires in Michigan claimed over 1000 lives, but the worst fires were in Wisconsin:

“The air was no longer fit to breathe, full as it was of sand, dust, ashes, cinders, sparks, smoke, and fire. It was almost impossible to keep one’s eyes unclosed, to distinguish the road, or to recognize people, though the way was crowded with pedestrians, as well as vehicles crossing and crashing against each other in the general flight. Some were hastening toward the river, others from it, whilst all were struggling alike in the grasp of the hurricane. A thousand discordant deafening noises rose on the air together. The neighing of horses, falling of chimneys, crashing of uprooted trees, roaring and whistling of the wind, crackling of fire as it ran with lightning-like rapidity from house to house—all sounds were there save that of human voice. People seemed stricken dumb by terror. They jostled each other without exchanging look, word, or counsel. The silence of the tomb reigned among the living; nature alone lifted up its voice and spoke.”

The Peshtigo Fire covered an area about twice the size of Rhode Island, and claimed twelve rural communities before burning itself out. Well over a thousand people in the frontier town of Peshtigo perished on October 8, victims of either the fire itself or from drowning or succumbing to hypothermia while taking refuge in the frigid water of the river.

The Great Chicago Fire remains the most famous fire of that day, but the firestorm known as the Great Peshtigo Fire was the most lethal.