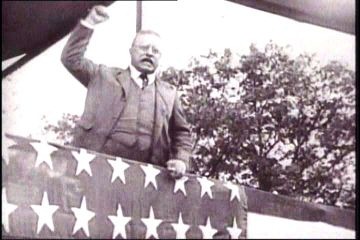 born abroad. But a hyphenated American is not an American at all. This is just as true of the man who puts “native” before the hyphen as of the man who puts German or Irish or English or French before the hyphen. Americanism is a matter of the spirit and of the soul. Our allegiance must be purely to the United States. We must unsparingly condemn any man who holds any other allegiance. But if he is heartily and singly loyal to this Republic, then no matter where he was born, he is just as good an American as anyone else.

The one absolutely certain way of bringing this nation to ruin, of preventing all possibility of its continuing to be a nation at all, would be to permit it to become a tangle of squabbling nationalities, an intricate knot of German-Americans, Irish-Americans, English-Americans, French-Americans, Scandinavian-Americans or Italian-Americans, each preserving its separate nationality, each at heart feeling more sympathy with Europeans of that nationality, than with the other citizens of the American Republic.

The men who do not become Americans and nothing else are hyphenated Americans; and there ought to be no room for them in this country. The man who calls himself an American citizen and who yet shows by his actions that he is primarily the citizen of a foreign land, plays a thoroughly mischievous part in the life of our body politic. He has no place here; and the sooner he returns to the land to which he feels his real heart-allegiance, the better it will be for every good American.