An old Indian sat there and when we came in, said, “How you do?” and extended his hand. Quite polite to give his sole English.

White Thunder was on the bed. He was not very cordial toward me, I thought. We all sat on chairs. He brought out his 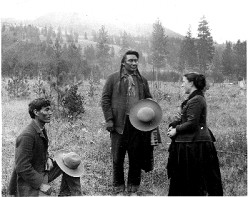 papers, the Treaty concerning the Ponca Band, the list of articles to be issued at the Rosebud Agency for 1881 and 1882. I copied this in Book II –
Several other Indians there, two young men and an old man. Swift Bear came in and stayed.

While we sat there, White Thunder’s wife began to cook. She made bread and baked it, wretched stuff, heavy and poor. Coffee and some sort of stripped and dried meat boiled with pork. A cloth was put on the floor between White Thunder’s bed and the stove and the meal served on china plates and cups and saucers. At the back of the chief’s bed was a bed spread on the floor, back of this was stored the various packs all covered with beads, I think four or five of them. There were trunks and valises and bags.

A pair of paddles lay on a few nails like brackets. Don’t know what they are. A doll, French, was dressed with a necklace, whereon 10 cent pieces were strung. She was put in one of the baby hoods. This is a long bag open at one side. The back is a plain strip the sides joined to it, at the top a little ornamental flap. Sometimes the end is trimmed with little brass sleigh bells – these about the baby’s face. The baby is laid in there and carried in the mother’s arms. The doll belonged to her daughter, a girl of ten or twelve. She had her hair in braids with beads at the end a tassel of brass beads.

The girl wore a blanket most of the time. The mother wore the usual dress, calico, red. She was painted, bright red cheeks, her hair part being red. A young comely girl came in, brought in meat and looked bright and pleasing. This was the wife’s younger sister, had been at Carlisle school. She is about eighteen years old.

I understand that White Thunder wants to marry this girl as his second wife. She declines. It is rather startling and unpleasant to contemplate this woman’s future. I hope she will hold out.