“Ugliness is so grim,” Lady Bird Johnson once said. “A little beauty, something that is lovely, I think, can help create harmony which will lessen tensions.” 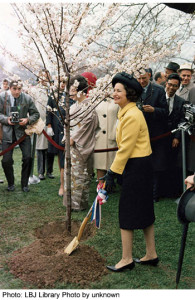 The belief that beauty can improve the health of society, and the determination to make the United States a more beautiful country became Lady Bird Johnson’s legacy.

“Getting on the subject of beautification is like picking up a tangled skein of wool,” she wrote in her diary. “All the threads are interwoven — recreation and pollution and mental health, and the crime rate, and rapid transit, and highway beautification, and the war on poverty, and parks — national, state and local. It is hard to hitch the conversation into one straight line, because everything leads to something else.”

Lady Bird understood how deeply conservation and beautification was interwoven with President Johnson’s Great Society agenda. She believed that if she could help clean up the impoverished capital city of Washington, DC, it would become an example to other cities across the country.

In February 1965, Lady Bird invited possible donors and activists to the White House to “stimulate new interest in making our city truly beautiful for the people who live here and come here.”

Many she met with believed that money should be channeled towards improving places which tourists frequented; others insisted that the inner city needed resources for playgrounds and general infrastructure. Lady Bird supported both camps.

“My criteria for the project are that it receive the fullest use, that it can be maintained easily, and that the desire emanate from the neighborhood and its people.” She wanted to “make a showcase of beauty on the Mall, which would be used by the American people, instead of just looked at. Take the small triangles and squares with which Washington abounds, now quite barren except for a dispirited sprig of grass, and maybe a tottering bench, and put shrubs and flowers in them, through the volunteer help of neighborhood associations or business firms (it would take some cutting of red tape to do that); perhaps have a volunteer committee of landscape architects to draw up plans, so that we can have continuity and good taste and a wise choice of plants.”

Lady Bird and her husband had driven many times from their home in Texas to Washington, DC, and had been appalled by the junkyards and billboards along the way. Lady Bird wanted the highways clear of billboards and junkyards, and filled with green landscaping and wildflowers. In his State of the Union address in 1965, President Johnson supported this issue saying “a new and substantial effort must be made to landscape highways to provide places of relaxation and recreation wherever our roads run.”

At one in the morning on Oct. 8, 1965, the House of Representatives finally voted on “Lady Bird’s bill,” as Representative Bob Dole, one of the leaders of the opposition, patronizingly called it. The vote finally passed, 245 to 138, and a few exhausted representatives went to the White House to present the bill as a gift to the first lady.

On October 22, 1965, President Lyndon B. Johnson signed the Highway Beautification Act, saying “This bill will enrich our spirits and restore a small measure of our national greatness. Beauty belongs to all the people. And so long as I am President, what has been divinely given to nature will not be taken recklessly away by man.”