The idea of building a colossal statue of “Liberty Enlightening the World” in New York Harbor seemed a harebrained scheme. There was an avalanche of criticism – architects declared the statue would blow over in the first storm. Wealthy patrons were slow to accept the artistic merits of the statue; the New York Board of Education refused to allow school children to perform fundraising concerts; an appropriation in Congress failed; and Grover Cleveland, then 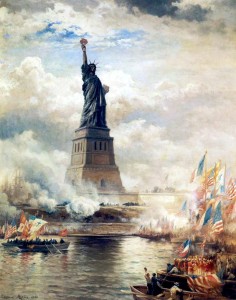 Governor of New York, vetoed a bill by the New York legislature to contribute $50,000.

But Senator William M. Evarts thought it was a grand idea. The former Secretary of State was the chair of the American arm of the Franco-American Union and was working tirelessly to raise American funds for the statue’s pedestal and erection on Bedloe’s Island. Eventually Evarts enlisted Joseph Pulitzer, publisher of the World to successfully recruit enough school children across the country to raise pennies for the project, and financing for the pedestal was completed by the summer of 1885.

It took twenty years for the project to come to fruition, but on October 28, 1886, the Statue of Liberty was finally set to be unveiled. Senator Evarts, one of the most noted orators of the day, would make the keynote speech.

On the morning of the dedication, hundreds of thousands gathered from Madison Square to Battery Park at the southern tip of Manhattan. As the parade passed the Stock Exchange, traders threw ticker tape from the windows, beginning a New York tradition. A nautical parade proceeded to Bedloe’s Island for the dedication.

After the French representative spoke, Senator Evarts launched into his grand oration. At the end of a particularly eloquent passage, Evarts paused for effect and received a hearty round of applause. The sculptor Bartholdi had gone up into the statue and held the rope with which he was to pull away the French flag which enshrouded Liberty’s head, and unveil his masterpiece. A young boy gave him the “high sign”; thinking the applause marked the end of Evarts’ oration.

Bartholdi pulled the rope. The hundreds of steam craft in the harbor, discovering the giant face of Liberty, unanimously saluted her with their horns and whistles. Senator Evarts was about to continue when the U.S.S. Tennessee, flagship of the squadron, fired a broadside. The band then struck up “My Country, ’tis of Thee.”

Amid the din of the crowd, Senator Evarts inaudibly finished his address; only President Cleveland – who possessed a keen sense of humor – appeared to give the speech which no one could hear his most grave and concentrated attention.