JOB. xxi. 6. “Even when I REMEMBER, I am afraid, and trembling taketh hold on my flesh.”

The earthquake, which was throughout the country, in the night between the 29th and 30th of October, 1727, was in this town much as it was in other places, of which there are divers printed accounts; only, as I suppose, it was something weaker here than in those towns that lie upon the Merrimack; so, I believe it was stronger here than in Boston, or the towns thereabouts. 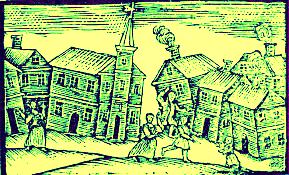 The shake was very hard, and was attended with a terrible noise, something like thunder. The houses trembled as if they were falling; divers chimneys were cracked and some had their tops broken off. It was especially so in the south parish, where the hardest shake seemed to be on the hill, where the house of God stands. Three houses on that hill had their chimneys broken, one of which was the house of the Reverend Mr. Whipple.

When the shake was beginning, some persons observed a flash of light at their windows, and one or two saw streams of light running on the earth; the flame seemed to them to be of a bluish color. These flashes, no doubt, broke out of the earth; otherwise it is probable, they would have been seen more generally, especially by those who were abroad. The sea was observed to roar in an unusual manner. The earth broke open, near the south bounds of the town (as it did in divers places in Newbury) and cast up a very fine bluish sand. At the place of the eruption, there now (above two months after) continually issues out considerable quantities of water; and for about a rod around it, the ground is so soft, that a man can’t tread upon it without throwing brush or some other thing to bear him up. It is indeed in meadow ground, but before the earthquake, it was not so soft but that men might freely walk upon it. A spring of water, which had run freely for fourscore years, and was never known to freeze, was much sunk by the earthquake, and frozen afterwards like any standing water. There were divers other shocks the same night; yea, the sound was heard, and sometimes the shake felt every day for a fortnight after…

It is hard to express the consternation that fell, both on men and beast, in the time of the great shock. The brute creatures ran roaring about the fields, as in the greatest distress. And mankind were as much surprised as they, and some with very great terror; so that they might say, as Psalm 55:5; “Fearfulness and terror hath come upon me, and horror hath overwhelmed me.” All of us saw a necessity of looking to God for his favor and protection; and I would hope that many did, not only look to God in that time of their distress, but did truly and heartily return to him. Many are now asking the way to Zion with their faces thitherward. They say, Come, and let us join ourselves to the Lord in a perpetual covenant, not to be forgotten.

Making a credible profession of faith and repentance, they draw nigh to the Lord’s table, and observe that (hitherto) too much neglected ordinance of his supper. So the jailer, (Acts xvi.) was awakened by an earthquake, and so prepared for the receiving of the word, which by God’s blessing, immediately brought him home to Christ, and he rejoiced, believing in God with all his house. This is the happy effect, which by the grace of God, the earthquake has had upon some among us. The Lord increase their number! And make them faithful in his covenant, and give them the blessings of it!