In the bosom of one of those spacious coves which indent the eastern shore of the Hudson, at that broad expansion of the river denominated by the ancient Dutch navigators the Tappan Zee, and where they always prudently shortened sail and implored the protection of St. Nicholas when they crossed, there lies a small market town or rural port, which by 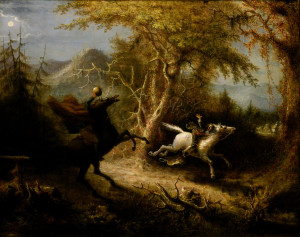 some is called Greensburgh, but which is more generally and properly known by the name of Tarry Town. This name was given, we are told, in former days, by the good housewives of the adjacent country, from the inveterate propensity of their husbands to linger about the village tavern on market days. Be that as it may, I do not vouch for the fact, but merely advert to it, for the sake of being precise and authentic. Not far from this village, perhaps about two miles, there is a little valley or rather lap of land among high hills, which is one of the quietest places in the whole world. A small brook glides through it, with just murmur enough to lull one to repose; and the occasional whistle of a quail or tapping of a woodpecker is almost the only sound that ever breaks in upon the uniform tranquillity.

I recollect that, when a stripling, my first exploit in squirrel-shooting was in a grove of tall walnut-trees that shades one side of the valley. I had wandered into it at noontime, when all nature is peculiarly quiet, and was startled by the roar of my own gun, as it broke the Sabbath stillness around and was prolonged and reverberated by the angry echoes. If ever I should wish for a retreat whither I might steal from the world and its distractions, and dream quietly away the remnant of a troubled life, I know of none more promising than this little valley.

From the listless repose of the place, and the peculiar character of its inhabitants, who are descendants from the original Dutch settlers, this sequestered glen has long been known by the name of SLEEPY HOLLOW, and its rustic lads are called the Sleepy Hollow Boys throughout all the neighboring country. A drowsy, dreamy influence seems to hang over the land, and to pervade the very atmosphere. Some say that the place was bewitched by a High German doctor, during the early days of the settlement; others, that an old Indian chief, the prophet or wizard of his tribe, held his powwows there before the country was discovered by Master Hendrick Hudson. Certain it is, the place still continues under the sway of some witching power, that holds a spell over the minds of the good people, causing them to walk in a continual reverie. They are given to all kinds of marvellous beliefs, are subject to trances and visions, and frequently see strange sights, and hear music and voices in the air. The whole neighborhood abounds with local tales, haunted spots, and twilight superstitions; stars shoot and meteors glare oftener across the valley than in any other part of the country, and the nightmare, with her whole ninefold, seems to make it the favorite scene of her gambols.

The dominant spirit, however, that haunts this enchanted region, and seems to be commander-in-chief of all the powers of the air, is the apparition of a figure on horseback, without a head. It is said by some to be the ghost of a Hessian trooper, whose head had been carried away by a cannon-ball, in some nameless battle during the Revolutionary War, and who is ever and anon seen by the country folk hurrying along in the gloom of night, as if on the wings of the wind. His haunts are not confined to the valley, but extend at times to the adjacent roads, and especially to the vicinity of a church at no great distance. Indeed, certain of the most authentic historians of those parts, who have been careful in collecting and collating the floating facts concerning this spectre, allege that the body of the trooper having been buried in the churchyard, the ghost rides forth to the scene of battle in nightly quest of his head, and that the rushing speed with which he sometimes passes along the Hollow, like a midnight blast, is owing to his being belated, and in a hurry to get back to the churchyard before daybreak.